If the positive trends from 2014 persist, we will soon be speaking not of a recovery, but of an expansion of Bulgarian labor markets.

The synopsis of the labor market in 2014 is undoubtedly positive – increasing employment and decreasing unemployment. Although the pace of recovery varies, the majority of the regions show simultaneous drop in unemployment and increased job-creation for the first time since the crisis began.

The regional review shows that:

However, except for the district of Montana, Northwestern Bulgaria remains in deep crisis. The labor market in districts such as Vidin, Lovech, Vratsa and Silistra (in the North Central region) not only doesn’t show any clear signs of recovery, but also the employment rate among the population over 15 years [2] remains below the critical minimum of 40%.

Sofia (capital) is the good exception of Southwestern Bulgaria, where, despite the relatively favorable last quarter, the labor market in districts such as Blagoevgrad and Sofia (district) continue to experience difficulties in creating jobs.

Despite that, the overview at a regional level for 2014 is markedly positive. In the second half of the year we also observed more rapid job creation in the northern part of the country and specifically - in the districts of Veliko Tarnovo and Varna.

And yet – when will the pre-crisis employment levels be reached?

If the rate of increase of the number of employees in 2014 is maintained, the average annual employment levels from 2007 can be reached this year. The difference is only one percentage point, which can be achieved, according to the variation of the population, with the creation of between 40 and 50 thousand jobs. To reach the record levels of employment in 2008, however, we will need at least another year.

At the regional level, things are a bit different. Some areas such as Kardzhali, VelikoTarnovo, Razgrad and Shumen have already reached the levels of employment of the population of 15 years and older reported in 2008. All of them, however, are areas in which the employment is generally lower than the national average (in some of them even close to 40%).

Of the larger districts in the country Bourgas and Plovdiv are closest to reaching their peak pre-employment levels. Sofia (capital) and Varna are still far away. In the country there are areas, such as Lovech, Kyustendil and Blagoevgrad, where the crisis in the labor market continues unabated.

The question of 2015: "How sustainable is the recovery?"

The answer to this question is not easy. Although the trends in many regions of the country seem stable and are padded with good economic arguments (effective and planned investments in particular regions, improving infrastructure and expectations among businesses etc.), data on the state of the labor market in the country does not inspire much hope that the best is yet to come. Serious problems remain the structural characteristics of the unemployment in our country, the low investment activity and the demographic trends.

Although there is room for further improvement of the labor market (employment of the population aged 15-64 in 2014 was 61% compared with 64% in 2008), the capacity of the Bulgarian economy to generate employment considering the absence of significant external capital seems limited. A large share of the reserve labor force includes people with primary or lower education, whose employment rate, even though it increased in 2014, remains only 19.2% among the working age population.

The employment rate of people with primary education is 32.3%, while the share of those with secondary and tertiary education that have a job is way higher - 65.2% and 81.7%.

If the favorable trends of 2014 continue, soon the topic won’t be the recovery but the expansion of the labor market. The latter definitely needs support from the government. However, the creation of subsidized employment, something relatively common in Bulgaria, is clearly not the way forward. What’s needed is to ensure optimal conditions for the natural creation of jobs.

Increasing the social security burden and the minimum wage (in a period of stagnating consumer prices) is definitely not what the labor market needs at the moment.

The new expansion will need new arguments, including educational reform, revising anachronistic labor laws and improvement of the quality of re-qualification programs.

Something else will be needed as well – a change in the way of thinking of Bulgarians and understanding that personal development does not stop when one finishes school/ university, but is a life-long process.

[2] Even among population aged 15-64, employment in these areas remains well below the national average.

An English summary of IME's regional review of the Bulgarian healthcare system will be available on March 18th 2015.

Since 2012 the Institute for Market Economics investigates the condition and development of socio-economic processes on a regional level in Bulgaria. The current analysis looks at the condition of some aspects of the healthcare system in the country, as well the population’s satisfaction with the provided services.

There are two main conclusions that stand out as result of our analysis of regional healthcare systems and  the our two nationwide surveys. The first one is the huge differences between the access of the population to doctors, medical professionals and healthcare infrastructure, which raises questions about the accessibility of health services and their efficiency. The second conclusion is that the presence of more hospital beds per capita, more doctors, nurses, emergency teams etc., does not necessarily mean higher quality of healthcare and better satisfaction with the services that are provided.

Judging by the number of beds in Multiprofile Hospitals for Active Treatment (MHATs) per 10 000 people in the different regions in 2012, the best acess to medical services is in Montana, Pleven and Targovishte, and the worst – in Bourgas, Pernik and Blagoevgrad. At the same time in some regions, such as Montana, the big number of hospital beds is focused in a small number of MHATs, which restricts the access of the population to hospital services. At the same time Bourgas has one of the lowest hospital-beds-to-population ratios, but is characterized by relatively high number of hospitals, which improves the access to healthcare.

In most regions there are similar ratios between doctors and population, but the difference between the regions with the least and the most specialists are significant. This difference can be as big as 4 times in the internal diseases specialists and orthopedics in 2012. If we take a look at pediatricians, in Sofia-Capital there are three times as many specialists as the second best region – Gabrovo, and nearly 29 times as much as the region with the least amount of these specialists – Sofia-Province. The data for the relatively high amount of pediatricians in Gabrovo in 2012 is surprising, when taking into account that the region has one of the worst demographic conditions.

Besides objective data for the condition of health care supply on a regional level, a lot of questions are raised by the sociological research on population health care satisfaction, which IME is performing in the past several years. It shows that regions with similar indicators for hospital beds and medical personnel have completely different service quality ratings. Such examples are Kiustendil, Haskovo, and Ruse, where the healthcare infrastructure is comparable, but in 2012 only 8.3% of respondents would qualify the healthcare services as good, compared to 35.4% in Haskovo and 68.1% in Ruse. In other words, the presence of good healthcare infrastructure (high number of hospitals and beds) and medical personnel is a prerequisite for better accessibility of the health care service, but not a quality and patient satisfaction guarantee.

Noteworthy is also that often a high percentage of lower ratings of the healthcare system goes hand in hand with high corruption perception.  Such negative examples are regions with big cities like Sofia-Capital, Bourgas and Plovdiv, which are amongst the “top five” in both corruption perception and the ratings of the work of the healthcare system.

Big differences between the regions, both in regards to healthcare infrastructure, as well as population ratings of health services show that the healthcare system has problems not only on national, but on regional level too. Problems are not isolated strictly to the healthcare’s access to finances and specialists, and they also decrease the quality of services, available to patients.

A short summary of the new IME policy paper on regional development.

Since 2012 the Institute for Market Economics (IME) analyzes the social and economic development of Bulgaria’s regions. For your consideration, we present “Regional Profiles: Policy Proposals 2015”.

The regional development data for the past ten years highlights the need for drastic change of the regional development philosophy. Although policy makers are starkly aware of many of the current problems, the approach for dealing with them remains decidedly administrative and centralized, which diminishes the efficiency of most policy measures.

Furthermore – to this day Bulgarian regions remain hostages to political interests and to a large degree are deprived of the opportunity to resist the negative demographic, sociological and economic tendencies taking place within their boundaries.

The problems of local communities can be best recognized at the local level.

At the same time a big part of EU funds are spent on projects and activities that are not directly related to the problems of local communities. In the long term the local executive bodies’ insufficient resources and lack of fiscal independence is bound to accelerate communities’ degradation and undermine the democratic process.

The recommendations, outlined in “Regional Profiles: Policy Proposals 2015”, are a result of IME’s three years work in the field of regional development. 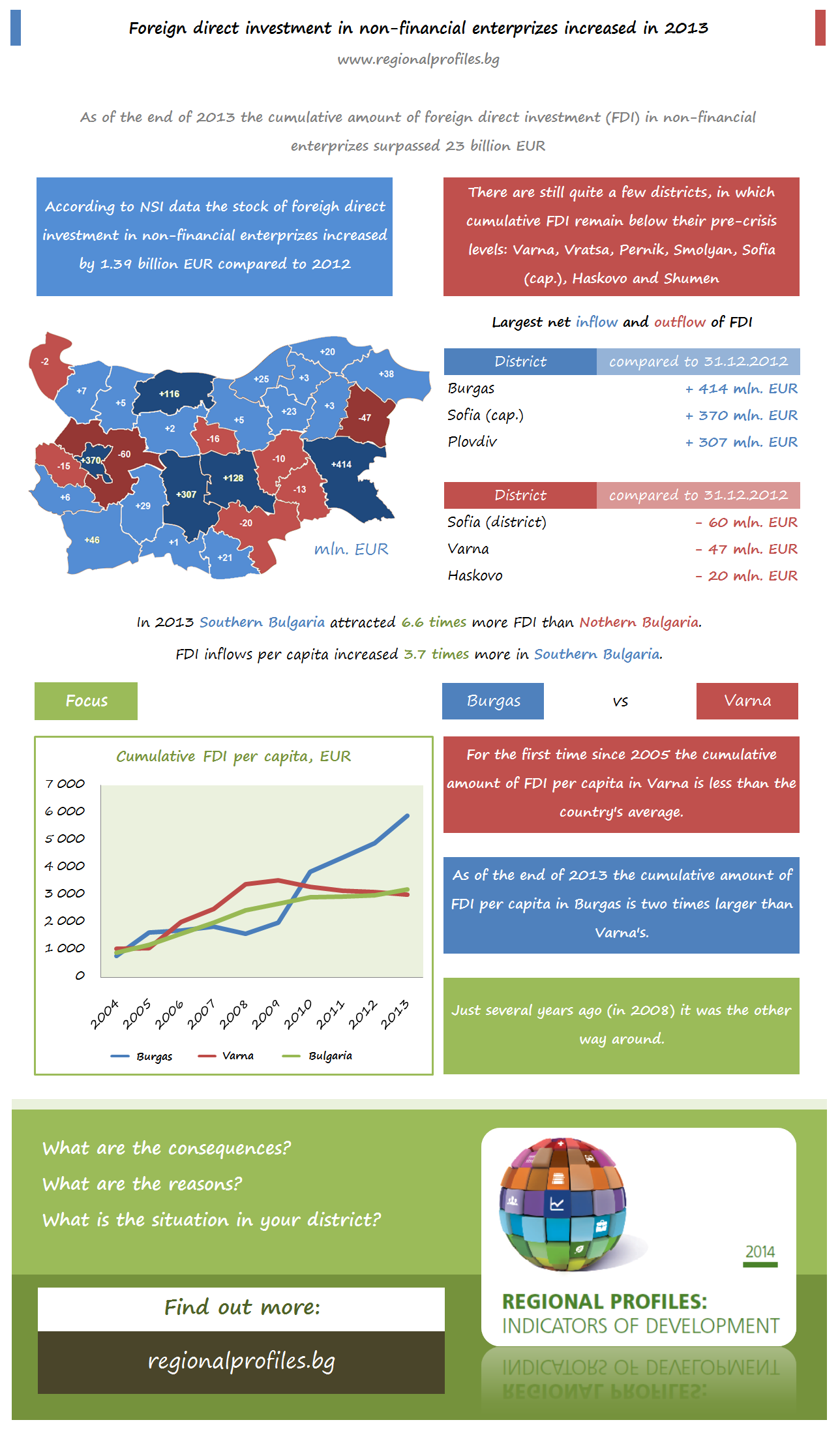 The labor market recovery continues to gain momentum in 2014. Job creation in Northern Bulgaria gradually picked up in the second half of the year. 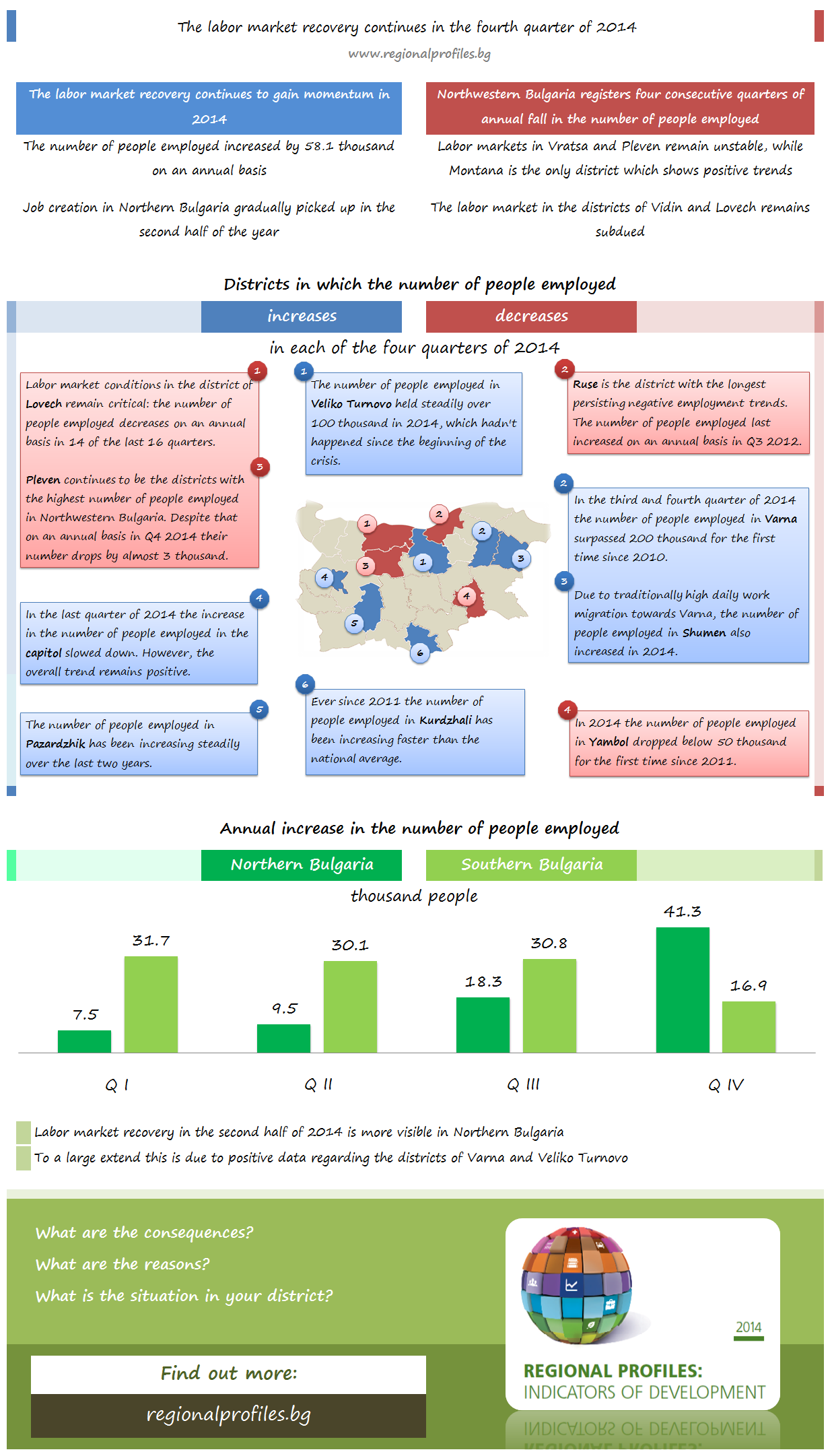 There’s a tendency of falling average ratings in regard to the quality of the e-services that local administrations offer. 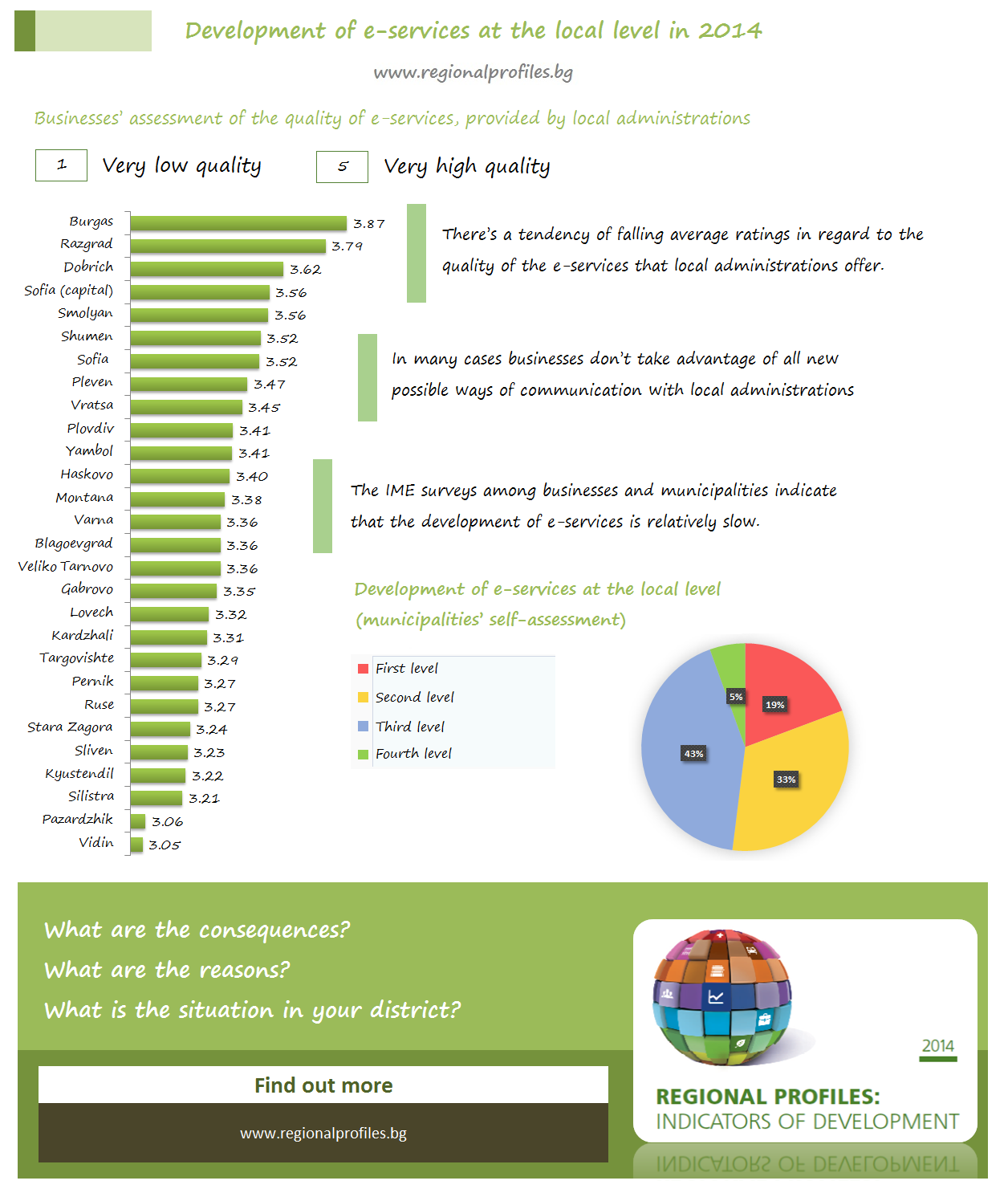 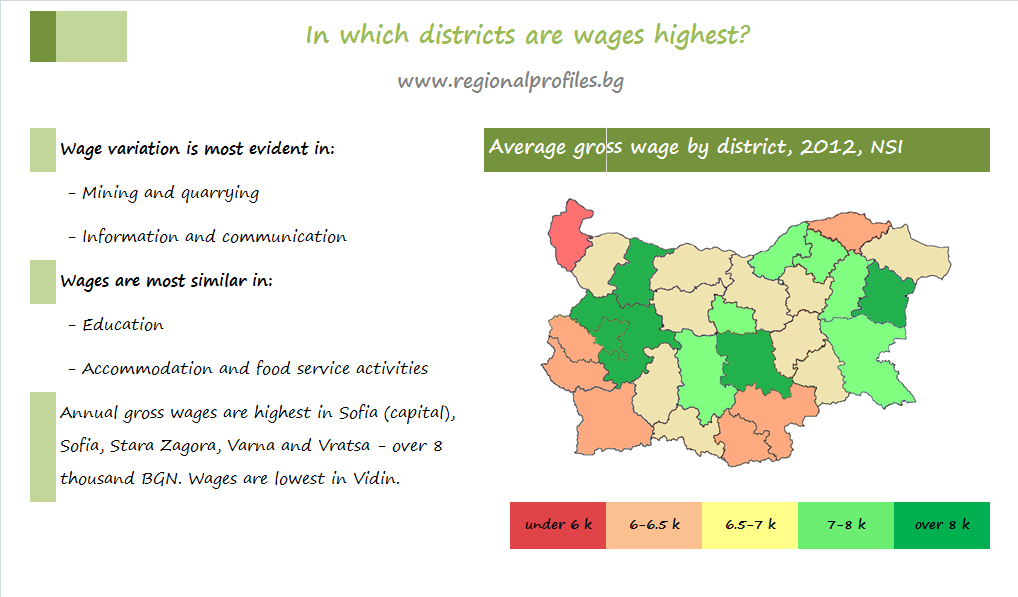 Access to doctors: modest improvement for GPs in some districts 29.07.2022

Although the Covid-19 pandemic and measures to support the health system are now far from the center of the...

Seven percent of small enterprises have received European funds to deal with the covid crisis 18.07.2022

At a stage of relative lull in the spread of Covid-19, we take stock of the past two years of active...

The external evaluations that already take place at four stages of schooling – after fourth, seventh, tenth...