In 2017, the IME set out to map the borders of Bulgaria’s economic centres. Our goal was to go beyond the country’s administrative and territorial division and establish new internal boundaries, based solely on natural economic processes. The grouping within the centres was done around the economic cores, which gather significant daily labour migration from surrounding municipalities, have significant concentration of employed people and generate relatively large production.

It is important to note that the map of the economic centres does in no way cover the entire economic and investment map of the country. The exclusion of certain regions does not mean that there is no economic activity, investments and perspectives for development in them. It is true, however, that the municipalities not included in the map fall behind in their level and rate of economic development in comparison with the centres. They also lack peripheries, and thus they lack tangible effect on employment in the surrounding municipalities. Because of this, the focus of the analysis is on the 20 largest centres. 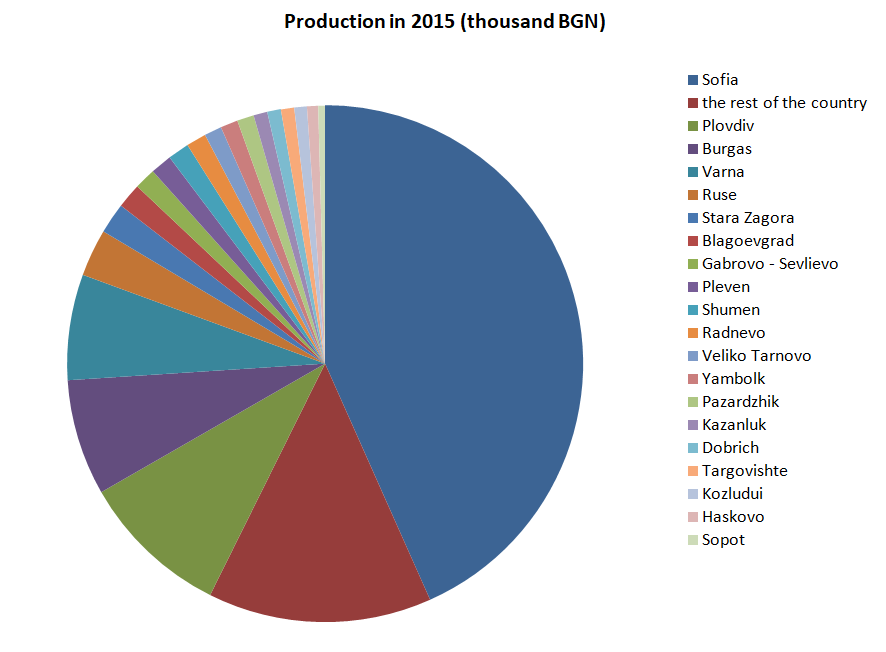 Particularly interesting is the fact that the process of concentration of economic activity in the centres has continued in the past years. In 2011, 85% of the production of the country was generated in them, while five years later this share has increased by 1 percentage point. The continued concentration of capital and labour in them as a result of the good infrastructure, the size of their markets, synergies with existing companies, the social environment and other factors will likely continue to support this trend of economic centralization.

The economic centres attract most of the investment – 81% of foreign direct investment (FDI) in the country at the end of 2015 where in them. When it comes to the other important investment indicator - annual expenditure on tangible fixed assets (ETFA), three quarters of all ETFA’s were made in the centers in 2015.

The total number of economic centres in the country is 20, but their size, territory and economic profiles are very diverse. It comes as no surprise that the largest economic centre has formed around Sofia municipality. It is the largest in terms of territory, population, production, investment, and number of employed. The Sofia economic centre also has a secondary core – Pernik municipality. This happens because Pernik attracts significant labour migration from the surrounding municipalities, but in the same time it is a major labour donor for the capital – so large that Pernik is the municipality with the lowest net labour migration in the country. This centre generates 43% of the total production of the country according to 2015 data, and 42% in 2011. The centre encompasses 18 municipalities and employs a third of the workers in the country. The centre attracts the most foreign investment – 55% of the total FDI as of the end of 2015.

Here, the unemployment is the lowest in the country (3.5% in 2016), and the average salary is the second highest in the country (1174 leva average monthly gross salary), lower only than that in the small economic centre Kozlodui where the high salaries in the nuclear power plant have significant impact on the averages.

The economic centre around the capital also has a concentration of highly educated people, as it has the highest share of the population with tertiary education – nearly one third, compared to 20% in the country as a whole. The quality of education, measured through the results on the Bulgarian language and literature matriculation exams, is the highest in “Sofia” – Good 4.48 in 2016, compared to 4.17 in the entire country, which points to a capability of the centre to retain a high share of highly education population.

Apart from the centre around the capital, the other geographically large centres are formed around the core municipalities of Plovdiv, Burgas and Varna. The second largest centre – “Plovdiv” is nearly five times smaller in terms of production compared to “Sofia”. The total production of the three centres “Plovdiv”, “Burgas” and “Varna”, as well as the number of employed in them is a little more than a half of that of the economic centre around Sofia, and foreign investment is about a third.

The centre around Plovdiv – the second largest in the country – encompasses 12 municipalities and generates about one tenth of the total production of the country. We have to not that, thanks to significant investment and the attraction of human capital from remote municipalities, “Plovdiv” has one of the highest production growth rates among the economic centres in the past five years. In 2015, the production in “Plovdiv” was 39 per cent higher compared to 2011, second only to the 40 per cent growth of the much smaller centre around Ruse.

It is rather interesting that south of Stara Planina, all the centres are connected. In the same time, the centres in North Bulgaria are islands of economic activity and investments, surrounded by large areas with little economic activity. The only exception is the "agglomerate" of several centers in North-East Bulgaria, comprised of several interconnected centers – “Varna”, “Shumen” and “Targovishte”, containing a total of 17 municipalities, 10 of which are peripheral to Varna. It is likely that the absence of a highway north of Stara Planina also contributes to this situation.

The interconnectedness of the centers in the south part of the country means that it is likely that after some time the boundaries between some of them may start to fade. The center around the capital, for instance, borders “Pazardzik” to the east, which in turn borders “Plovdiv”. Near “Plovdiv” is “Haskovo” – a rather interesting center with a rather fast-growing core, but currently without a periphery. “Haskovo” is already officially positioned as a part of “Economic area Trakia” (EAT), which formed around Plovdiv in the past years, linking together six industrial areas. “Haskovo” could also become a part of the agglomerate comprised of “Sofia”, “Pazardzik” and “Plovdiv”. An important factor for this, of course, was the completion of two highways in South Bulgaria in the past years – “Trakia” (connecting Sofia and Burgas) and “Maritsa” (connecting “Trakia” highway at the Orizovo road junction with the Bulgarian-Turkish border at Kapitan Andreevo border checkpoint). 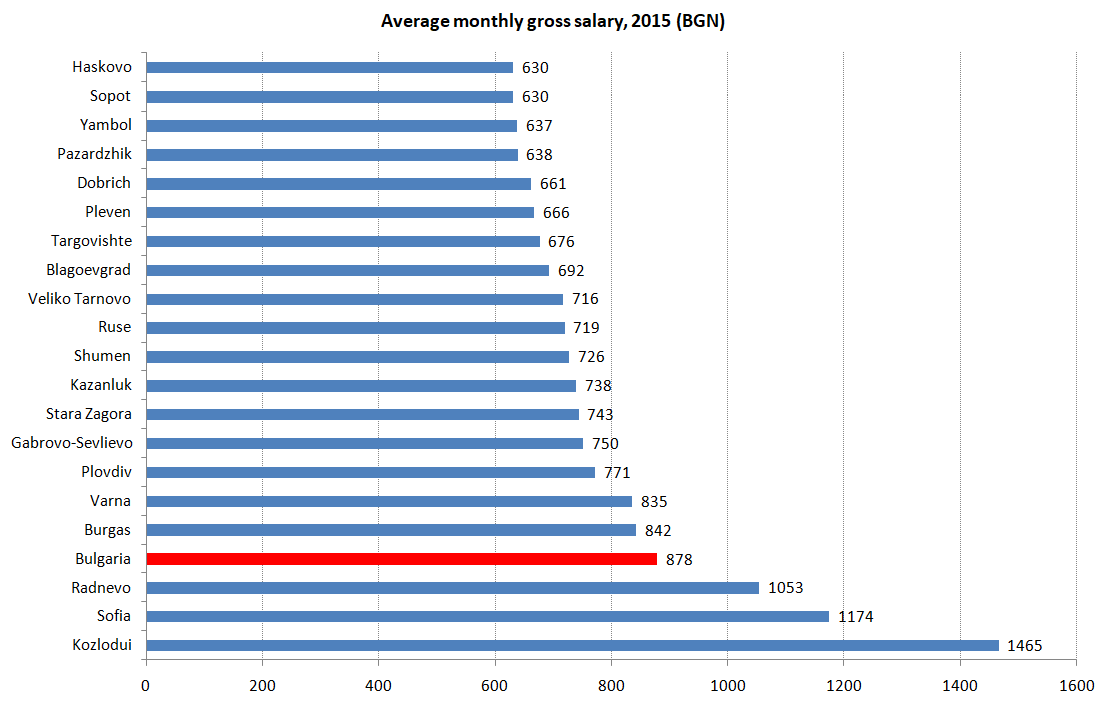 The agglomerate of centers in South-West and South-Central Bulgaria is also growing eastward. In the spring of 2017 it was announced that EAT will be expanding towards Burgas. A memorandum between the area and Burgas municipality has been signed, pursuant to which the territory of Burgas will be included in the area. Given that, it will come as no surprise if in the future a supercentre is formed in South Bulgaria, on the axis Sofia – Pazardzik – Plovdiv – Haskovo – Burgas.

On the other hand, in the area around Stara Zagora the IME methodology has identified four economic centers – “Sopot”, “Kazanlak”, “Stara Zagora” and “Radnevo”. Galabovo could also be added, as data from the recent years indicate the appearance of a new center, which has not yet surpassed the necessary thresholds. These five centres, given their territorial proximity, infrastructural and economic interconnectedness are a part of one larger economic centre, with a pronounced industrial economic profile. The natural formation of an economic centre is the reason for the push by local authorities for the creation of the “Zagore” industrial area. Without a doubt this move is a response to the good development of Plovdiv and the positioning of EAT as a leading investment destination. Obviously, “Zagore” will be the first attempt to replicate the successful model of EAT. The socio-economic profile of Stara Zagora forces the decision to form a separate investment destination rather than join the EAT. The two, of course, can have numerous links and amplify each other’s effects, but as separate zones with distinct profiles. The centres around Stara Zagora are relatively even in terms of the economic development of the five cores. This region has untapped potential for development in the field of information technology and outsourcing following Plovdiv, which is important for the retention of highly qualified young people in the area.

The lack of good and fast infrastructural links between North and South Bulgaria is an important factor influencing the boundaries of economic centers. There is, for instance, a clumping of several centers in Central Bulgaria on the two sides of Stara Planina – to the south, there are the centers around Stara Zagora, and to the north there a two other economic centers – “Gabrovo - Sevlievo” and “Veliko Tarnovo”. The lack of appropriate infrastructural connections through the mountain hinders the economic linking of the two active territories on its two sides and limits their growth potential.

The economic centre “Gabrovo - Sevlievo” north of Stara Planina is also a very interesting formation. It is comprised by two cores – the municipalities of Gabrovo and Sevlievo, united in a single centre due to the geographical proximity and relatively high labour migration between them. The centre has no periphery, and it has pronounced industrial profile. It has a relatively small economy, as its share is about 1% of the production of the country. The centre around Veliko Tarnovo is one of the smaller ones, as it has a core – Veliko Tarnovo municipality and only one peripheral municipality – Lyaskovets.

Among the economic centres to the north, “Ruse” has the largest economy, with a total of three per cent of the production of the country. It holds the second place in North Bulgaria, following Varna and fifth in the country. The centre formed around Ruse is comprised of five municipalities and employs 3% of all employees in the economy in 2015.

Tourism and city life in Sofia forgot about the pandemic and are already reporting records 27.01.2023

The new "Economic and Investment Profile of Sofia" (2022), prepared by the IME for the Sofia Investment...

Bulgaria's regional development remains very uneven, and the recovery from the covid crisis in 2021...