19.05.2014Which Districts and Municipalities Absorb the Most EU Funds

In recent years EU operational program fund utilization has become a leading prerequisite for the successful realization of many rural development, infrastructure and environmental projects on the local level. Although the actual payments as of January 31st, 2014 amount to less than 40% of all the value of all contracts of Bulgarian municipalities as beneficiaries of EU funding, the speed and scope of utilization is quite diverse.

To analyze their dynamics, we’ve used data provided by the Unified Management System for the EU Structural Instruments in Bulgaria[1]. By January 31, 2014 the total utilization of EU funds by Bulgarian municipalities amounts to 2.76 billion BGN and the total value of all contracts amounts to 7.55 billion BGN. 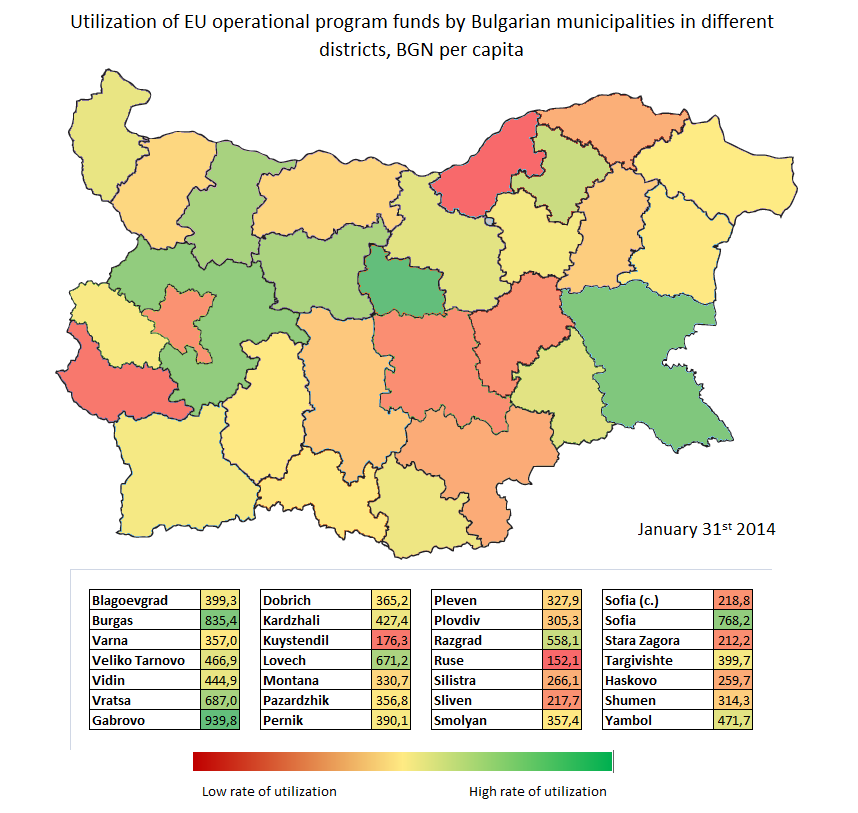 The comparison of EU fund utilization and IME data on e-government development in 226 municipalities (provided by the municipalities themselves) shows no correlation between the scope and quality of e-services, provided by local authorities, and their utilization of EU funds. There are plenty of examples of both municipalities with low level of e-government development which have managed to attract significant EU funding (like Hissarya and Pirdop), and municipalities with well developed-services with relatively low EU fund utilization rate (like Petrich and Pazardzhik). A slightly stronger, but statistically insignificant correlation can be found between municipalities’ one-stop-shop capabilities and their EU fund utilization results. In other words, there is no evidence that these two factors have any effect on the capabilities of municipalities to attract projects, which may be attributed to the specific characteristics of EU fund distribution mechanisms. Having a modern local administration is by no means a prerequisite for the attraction of EU funding, but may theoretically have relevance to the successful completion of planned activities.

Among well performing municipalities are also several small in size resorts like Hissarya (3 204 BGN per capita), Primorsko (2 852 BGN) and Sozopol (2 463 BGN). Kostinbrod also caught our attention with a per capita utilization of 3 419 BGN. The lowest utilization is registered in Gramada (0 BGN per capita), Kovachevtsi (0 BGN), Alfatar (2 BGN), Simeonovgrad (4 BGN) and Nevestino (5 BGN). The municipalities of Gramada and Kovachevtsi haven’t managed to attract a single project. Gramada has only put forward 2 project proposals, both of which were turned down.

The fact that 7 years after Bulgaria’s EU accession there are still municipalities that haven’t been able to secure any EU funding, is indicative of the nature of the problems. Apart from the purely administrative weakness of some smaller municipalities, this is due to other important factors and circumstances such as the quality of the strategic development documents, as well as the coordination between local and central authorities.

The continuing problems in some municipalities threaten to turn the absorption of EU funds in an increasingly serious problem in some areas of the country where the need for such projects is greatest. The reason is that other municipalities gain project experience and develop best practices, while those 52 municipalities where EU fund utilization as of January 31, 2014 was less than 100 BGN per capita, are becoming less able to compete for EU funds. These communities are scattered throughout the country. With the exception of the capital, only three districts (Gabrovo, Targovishte and Shumen) have no such municipalities. 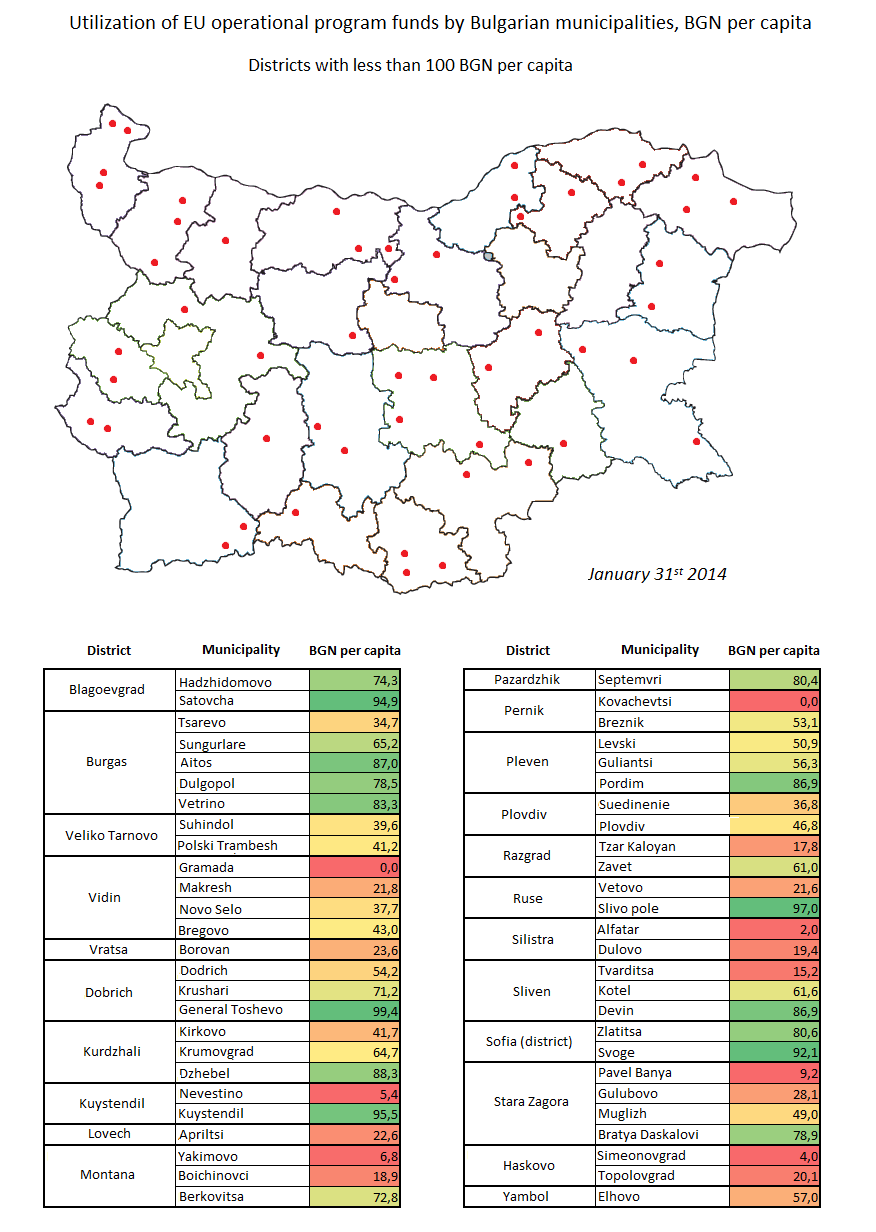 [1] The Unified Management System for the EU Structural Instruments in Bulgaria does not provide data on the projects and contracts of the Boboshevo Municipality.

[2] The comparison between different municipalities is based on their average annual population in 2013. This approach suggests some caution because of the different scope and intensity of the demographic processes in each of the municipalities and the long period of absorption of EU funds. However it generally provides a good overview of ​​the rate of utilization due to the fact that over 55% of the total funds utilized as of January 31, 2014 were paid in the period January 1, 2013 - January 31, 2014.