26.04.2013Both Wages and Unemployment Keep Growing

In 2012, the unemployment rate at national level has kept increasing, reaching 12.3%. Despite this, the average monthly salary of employees under labor contracts has increased by 8.6% on annual level. Even accounted for inflation (3% annual average in 2012), actual wage growth is still staggering at 5.4%.

The main issue here is how the labour market in the various districts of the country has responded to the combination of rising wages and persistently high unemployment. If we take a closer look at the dynamics of unemployment and wages by districts in 2012, we can differentiate four main types of districts:[1] 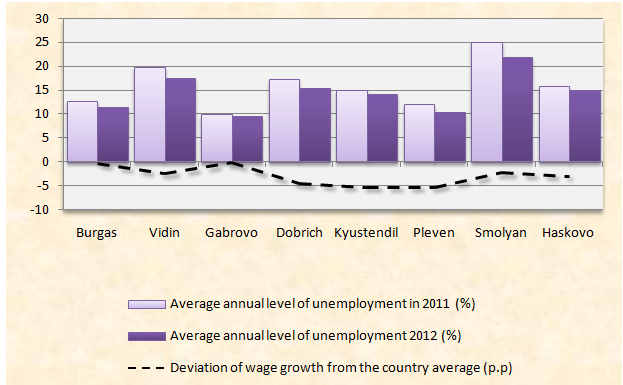 In eight districts: Burgas, Vidin, Gabrovo, Dobrich, Kyustendil, Pleven, Smolyan, and Haskovo, unemployment has fallen, and at the same time the average wage on annual level has increased, although at a lower rate than the national average. The slow rise of wages in some of the country’s poorest districts (Vidin, Smolyan, Haskovo, and Kyustendil) has resulted in a decrease of the unemployment rate. 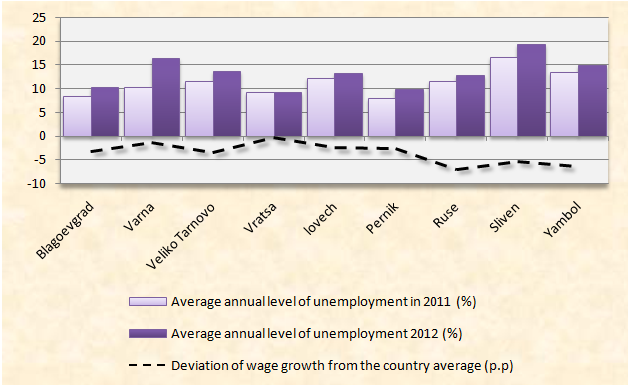 Unemployment increased in nine districts, although wages in them grew at a lower rate than the national average. These were: Blagoevgrad, Varna, Veliko Tarnovo, Vratsa, Lovech, Pernik, Ruse, Sliven, and Yambol. In most of these districts, nominal average monthly wage increase was minimal, being less than 3%in Ruse, Sliven, and Yambol. Especially striking was the case of Varna, where unemployment rose by 6%. The combination of slow wage growth and a continued rise of unemployment rate testified to the lack of flexibility in the labour markets of those districts. 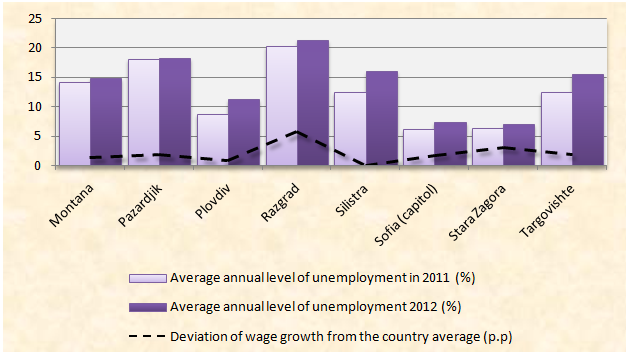 In eight districts, wages increased by a higher-than-the-national-average rate, and in the same time unemployment rose as well. Among those districts appear the ones with the lowest annual average unemployment rate – Sofia (cap.) and Stara Zagora. The significant rise of average wages in Razgrad in combination with increased unemployment possibly indicates the layoff of low-skilled employees.

The only two districts where the wage increase has outpaced the national average, without a negative effect on the labour markets, are Shumen and Sofia (district). The latter continues to close the gap with Sofia (capital), while the only districts with higher wage levels are Stara Zagora and Vratsa. Sofia (district) is the district with the third lowest unemployment rate after the capital and Stara Zagora. Meanwhile, Shumen remains one of the districts with the highest unemployment rate in the country in 2012.

The effects of the recent increase of the minimum wage and social insurance thresholds is yet to be evaluated. The fact that in most districts the wage growth rate, which is higher than the national average, goes hand in hand with an increase in the unemployment rate, indicates that the labour market needs more time before we can speak of a true recovery.

The simultaneous increase in the unemployment rate and wages, observed in many districts, demonstrates the lack of flexibility in local labour markets. Their low adaptability is caused by administrative interference, namely the constant increase of minimum social insurance thresholds and minimum wages, which in turn hinders the downward wage adjustment and fuels the layoff of workers.

[1] In order to track the dynamics of the increase in workers’ wages and the change in unemployment rate, we used data on the monthly salaries of employees under labor contracts in 2011 and 2012.

We calculated the increase in the average annual wage in each district based on the change of the wages on annual basis (compared to the same month in 2011) and its deviation from the national rate of increase. Due to the insufficient representative data for the labor market conditions in Kardzhali, we have omitted this district from the scope of our analysis. We evaluated the received data along with the regional unemployment dynamics.