23.11.2012Regional differences between North and South Bulgaria – is infrastructure the reason?

The author is Stoyan Hristov, an intern in IME.

One of the main issues of Bulgaria’s economy undoubtedly is the huge and growing gap between the economic development of the southern and northern regions. The problem was stated a few days ago by Simeon Dyankov, the minister of finance, during “Next year’s business plan” conference. The minister said that the main reason for this gap is the road infrastructure, and especially the lack of connections between the road networks of the two separate parts of the country.

Data on Bulgaria’s regions allow us to outline the most important trends. Obviously, the northern regions fall behind the southern ones on a number of economic indicators. According to the study “Regional Profiles: Indicators of Development” by IME, the northern regions score lower in terms of GDP per capita and employment. The average GDP per capita in Northern Bulgaria is about 6 thousand leva, while in the southern regions it is about 4 thousand leva higher. The difference is quite obvious; the real question here is whether the state of the road network is the only reason, or even the main reason for the growing gap in the wellbeing between the two parts of the country. 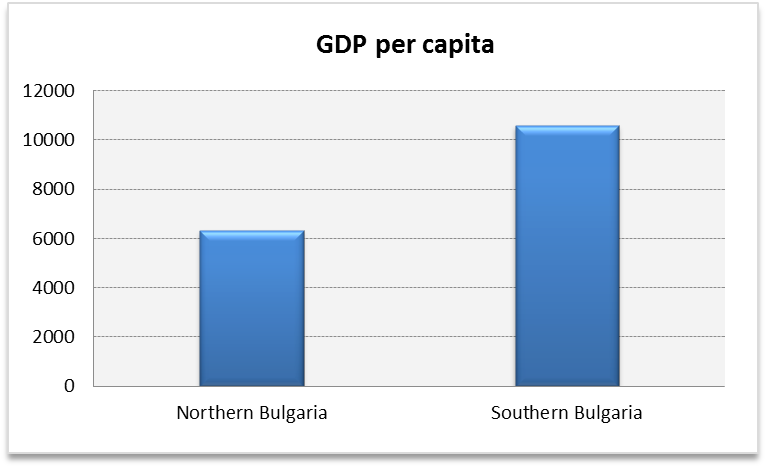 We are faced with the question how we can really assess the state of road networks. Different approaches to that exist, such as the degree of interconnection between the northern and southern regions and the quality of the roads themselves. If we use the density of the road network as an indicator[1], however, it turns out that Northern Bulgaria has an 18.57 kilometers of roads per 100 square kilometers, which is 3.81 kilometers more than in the southern part of the country. That is to say that the state of the road network in the northern regions – as assessed by this indicator – is not worse than that in the southern regions of the country.

The study by IME allows us to compare Northern and Southern Bulgaria using 8 main categories of indicators[2] – economy, business environment, infrastructure, demographics, education, healthcare, social environment and environment. The study shows that the northern regions score worse in 6 of the categories, namely when it comes to the level of economic development, infrastructure, population dynamics as well as the quality of the social environment, education and healthcare. Big differences can be seen not only in the economic scores but also in those regarding demographic factors and education. The only spheres in which the North scores better are business environment and natural environment. 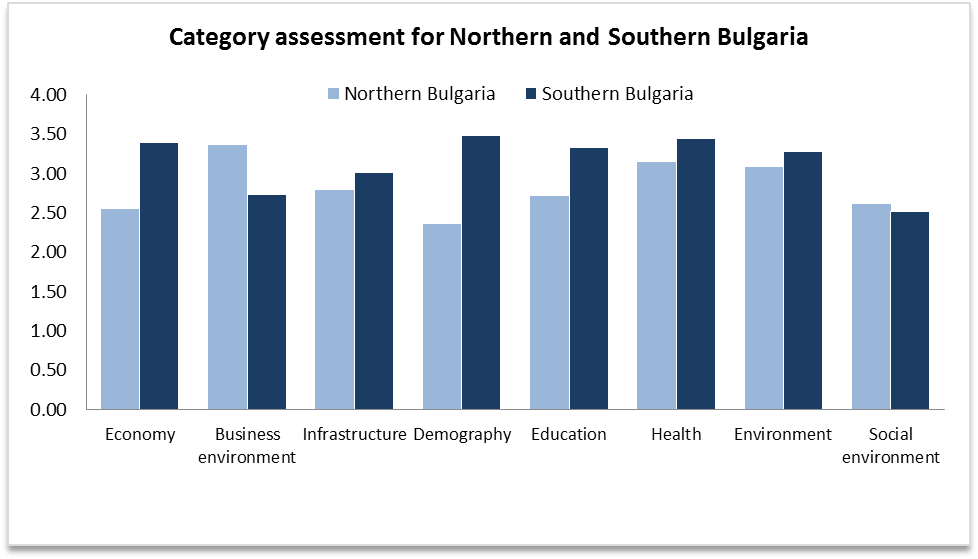 The bad interconnection between the road networks of Northern and Southern Bulgaria is a possible reason for some of the differences between the two parts of the country, as Simeon Dyankov claims, but it definitely is not the only one or the most important one. A good road network is a prerequisite for business development, but it would not bring any positive results in regions where demographic factors are negative and education is at a very low level. Business environment and the actions of local governments can also make a big difference and help less-developed regions grow.

[1] Road network density – the sum of the length of highways, first, second and third class roads

[2] The state of the indicators is assessed on a five-degree scale, where 1 is “weak” and 5 is “very good”