The data on household income level dynamics[1] in the last 10 years indicate a growing gap between the capital and the poorest districts in the country. Tha annual average growth rate of income levels in the period 2004-2013 is 12.79% in Sofia (cap.), compared to a national average of 8.50%. Income rises the most slowly in Lovech – by just 2.90% annually.

The statistical effect of the significant average annual rate of increase of income in the capital, together with the large and growing number of its population, is that in the period 2004-2013 there are only six districts in the entire country in which the average annual rate of income level increase is faster than the national average. Apart from Sofia (cap.) these are Plovdiv, Stara Zagora, Pernik, Pleven and Yambol. In the other 22 districts of the country the annual average rate of household income increase is lower than the national average, despite the fact that income levels themselves are higher than the ones in some of the before mentioned six districts. 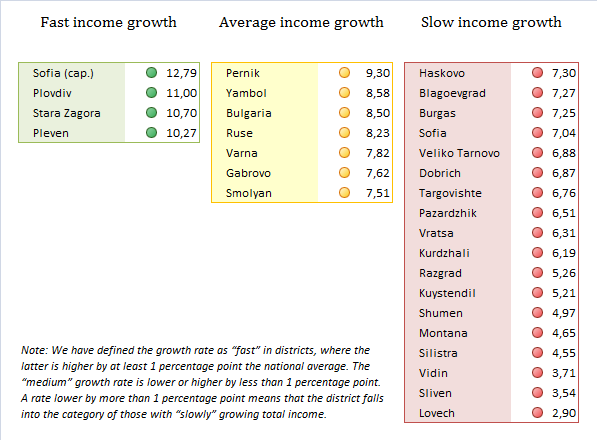 When will the other districts catch-up?

If the annual average rate of increase of income levels in the period 2004-2013 stays the same in the future, catching up with the capital would be impossible,

With this in mind, in order to illustrate the gap between the capital and the rest of the districts, we presume that income levels in separate districts continue to rise with their annual average rate for the period 2004-2013, while at the same time income levels in Sofia (cap.) stay on their 2013 levels.

Graph 2: When the rest of the country’s district will catch up to the capital 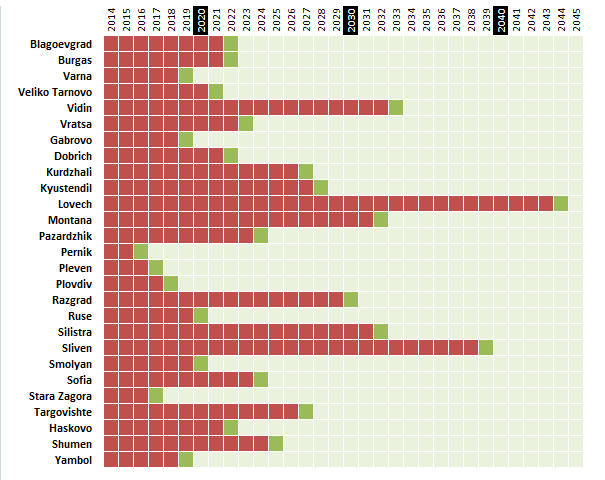 This dynamic is, of course, highly conditional, but it provides a good overview of the degree to which income levels in different districts lag behind the ones in the capital.

It is important to note that the annual average rate of income growth depends mainly from the condition of local labor markets, which is due to the fact that income from working salaries generates more than 50% of the total income of Bulgarian households. The demographic structure of the population in different districts is also important – the larger the share of senior citizens in a district, the larger the share of income from pensions. For example, pensions account for just 14.1% of household income in Sofia (cap.) and 32.0% in Vidin. The large share of income from pensions generally suggests not only a lower income level base, but also a slower growth, due to the administrative character of their initial setting and follow-up increases.

At this stage there are no signs that these tendencies will change any time soon. What’s more – the continuing rise of income levels in the midst of the economic crisis and the recovery that followed, coupled with the traditionally high economic activity of the local population make the gap grow even faster than in previous periods.

An IME study into the main factors, determining economic development, measured as GDP per capita, shows that the leading from statistical point of view prerequisites for faster growth are the quality of human capital, local infrastructure and entrepreneurship. The gap between income levels in Sofia (cap.) and the other districts may be narrowed only by increasing efforts to attract foreign investment, improved education, infrastructure development and the facilitation of a business-friendly regulatory environment.

[1] In this case, we take a look at the total earnings, which include monetary income (salary and other income, pensions, social benefits, income from sales and other transfers), as well as quantified natural income.