13.09.2019Decentralization, Regional Development and Restructuring in the Economy

Fiscal decentralization is based on two fundamental principles – ‘local self-governance’ and ‘subsidiarity’. Decentralization is a necessary condition so that local authorities could independently and responsibly manage public funds. We are convinced that common problems are most quickly and efficiently dealt with at the most basic possible level.

Given the contextual substantial transformations of the Bulgarian economy, decentralization is particularly important. In the decade following the 2009 financial crisis and the Bulgarian accession to the EU the transformation’s dimensions are generally two – an increasingly active integration of the private sector into international value added chains through growing exports and a gradual disappearance of low-productivity manufacturing based on manual labor which is being replaced by production with higher value added.

These processes are well illustrated by the shift of labor force amongst the sectors of the economy. For less than a decade the workers employed in construction have decreased with nearly 50%, while those in clothing and shoes manufacturing with a third. The employed in the food and furniture industries have also been diminishing despite the increased value of production. Simultaneously, more and more people are working in the automotive, pharmaceutical, electronics and power tools industries. Generally, manufacturing produces and exports significantly more than it did 10 years ago but with 100 000 fewer employees. 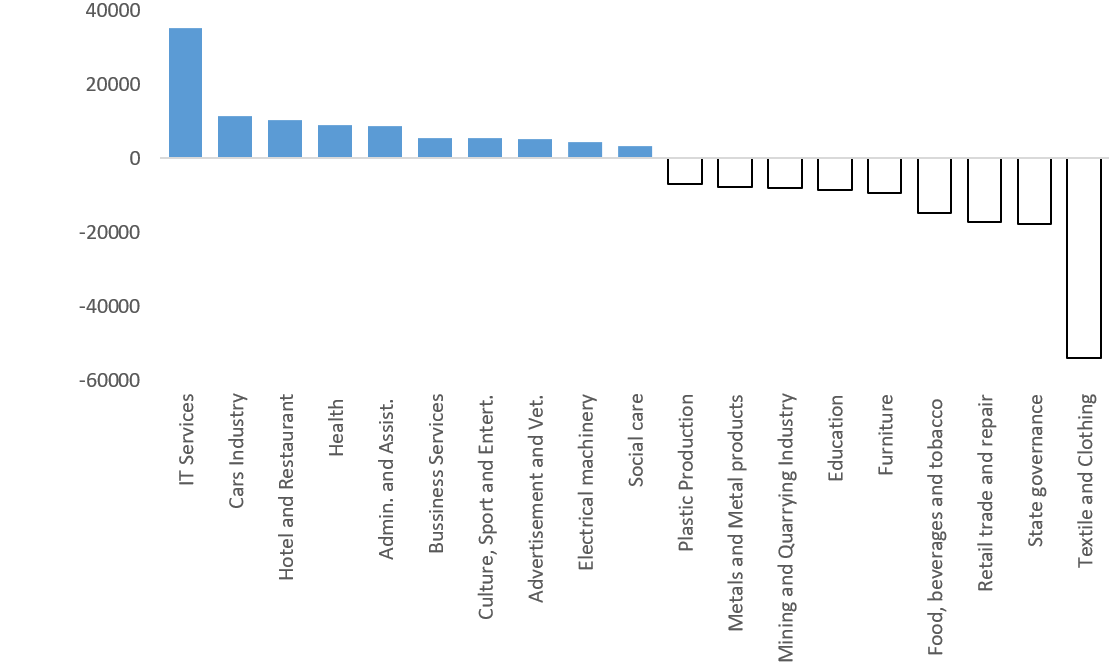 The structure of exports has also changed notably – the share of the automotive industry has tripled, that of power tools has doubled, while the portion of the machine, chemical and pharmaceutical, metal and plastic manufacturing is also expanding. On the other hand, the importance for the export of fuel, basic metals, textile and clothing has been gradually dropping. 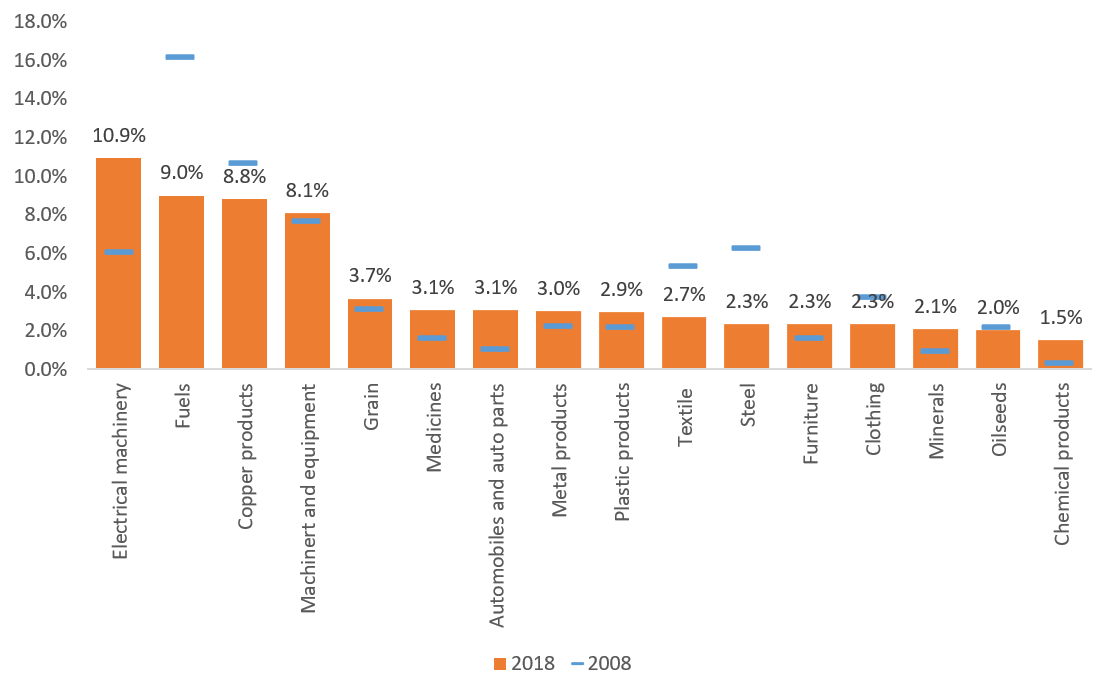 Some of the main export goods are products completely new to the Bulgarian industry. This is the consequence of a lot of new greenfield investments and of the recovery and substantial increase of the capacity of factories which, until recently, were exporting minimal quantities. These novel export goods are various: lighting, resistors, electric installations’ components, rubber hoses, electric bicycles and mopeds, etc. If we look at the dynamics of bicycles and sports equipment manufacturing we register production increases of 3.5 and 2.5 times respectively for the last 8 years and a nearly double rise in the employed in these sectors. The last observation is just another confirmation of the continuously improving labor productivity.

Chart 3: Turnover and number of employed in the production of Bicycles and Mopeds and Sports Equipment

The perceived shift is not only in the structure of products but also in the geographic allocation of jobs creation. In the period following the 2010 ‘bottom’ levels of manufacturing there is a minimal but unequal increase in the number of the employed. Sofia (capital) loses manufacturing jobs, as well as Burgas, Blagoevgrad and Dobrich. At the same time, new investment centers for export-oriented production appear – Plovdiv, Sofia, Stara Zagora, Sliven, Gabrovo. The relatively high unemployment rate also attracts investors to Lovech and Vratsa and we expect the latest data to show the same trends in Pleven and Montana. It is not an accident that some of the successful bicycles and sports equipment factories are also located in the Northwestern region of the country.

Despite the rapid increase in consumption and resurgence of bank crediting in the last years, the number of the employed in trade and finance remain below the 2008 levels. Contrariwise, employment in the outsourcing of supportive business services is gradually growing as the sector is turning into a key employer of workers with relatively good education and mastery of foreign languages. Nonetheless, the uncontested leader in employment growth over the last decade is the IT sector. Software engineering and information services are on average the best paying jobs in the country – already even above the maximum insurance threshold. However, this phenomenon is limited to Sofia (capital) – more than 30 000 new jobs – and, albeit to a lesser extent, to Plovdiv and Varna. Even though recently there has been good news from other regions too (e.g. Burgas), these economic zones still fail to attract a sufficient number of IT companies. 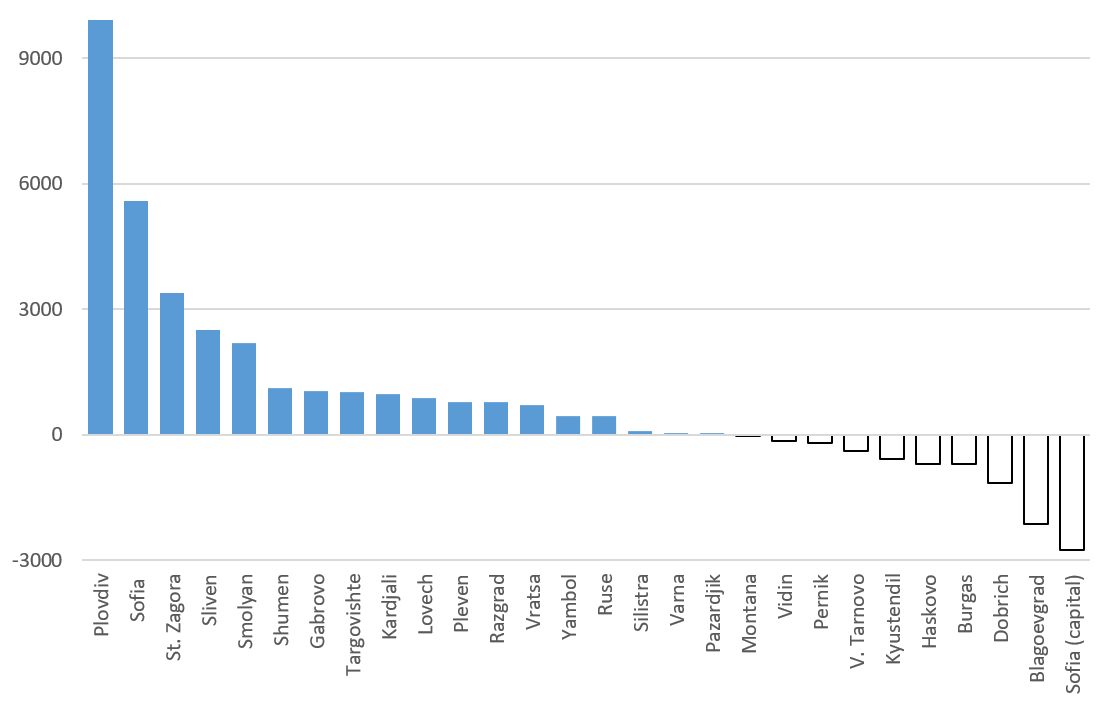 Having in mind the anticipated decline in the working-age population, the serious work force competition within the open and increasingly mobile common European labor market, as well as the achieved record-breaking employment levels, the challenge is to increase investment in those goods and services that create greater value added. These are activities that produce globally highly valuend goods and services created with contemporary technologies and highly qualified and productive laborers. Employers of this kind can offer sustained, long-term wage increases and can contribute to the general income growth of Bulgarian households.

Yet, the described transformation of the Bulgarian economic structure is a process encompassing hundreds, even thousands of separate investment plans. The initial step is the choice of Bulgaria as a country to invest in, which is then followed by the decision to build a factory or establish a service in a specific city or region. Municipalities must be especially active in this process, since they determine the conditions for the choice of location of a potential investor. Precisely this, together with the regional quality of living, should be at the center of local elections’ debates and, even more, it should be at the basis of the following four years of local self-governance

The text will be abailable in English soon.

The Labor Market in Sofia: Reviewing the Last Five Years and Looking at the Next Five 13.12.2019

The text in English will be avaolable soon.