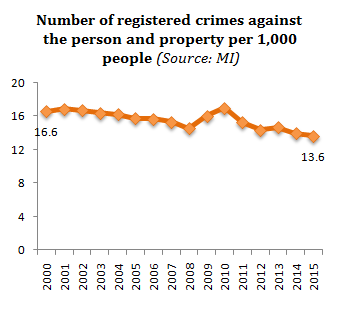 In 2015 the number of registered crimes continued falling and reached 98 thousand in comparison with 135 thousand back in 2000. Crime levels have also decreased in relative terms - from 16.6 per thousand people to 13.6 per thousand people for the 2000-2015 period.  This trend was interrupted only during the first years of the crisis (2009 and 2010), during which the number of registered crimes was rising. One possible explanation for the surge in the beginning of the crisis is the quick increase in unemployment and the overall drop in per capita income. 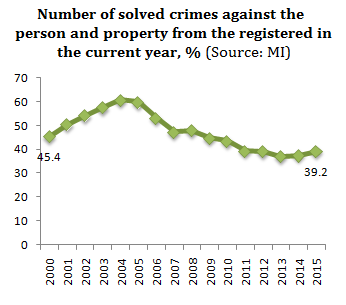 This significant decline in the number of solved crimes can be explained with the lack of reform in the Ministry of Interior (MI) and mainly the fact that its huge budget is being spent primarily for salaries and maintenance and not for capital investment. Additional reasons are the sluggishness and the anachronistic characteristics of the system, the possible existence of corruption and unregulated practices between the MI and the judiciary system.

Additionally, the data shows significant differences between the number of crimes registered and solved in different Bulgarian districts.

In 2015 the lowest number of per capita crimes was registered in Kardzhali and Smolyan, where crime levels are over three times lower than those in the districts with the highest crime rates: Burgas and the capital Sofia. It is worth noting that the more economically developed districts are also the ones with the highest registered crime rates. Of course, there are exceptions. For example, in the moderately developed regions Ruse, Plovdiv, Veliko Tarnovo and Blagoevgrad there are comparatively low crime rates, while the districts Vidin and Pernik perform poorly in economic terms and register rather high criminal activity.

Compared to 2000, the number of registered crimes has decreased the most in the districts Varna, Shumen and the capital.  Only in four districts the rates per 1000 people from the local population are rising: Gabrovo, Sliven, Sofia and Haskovo. 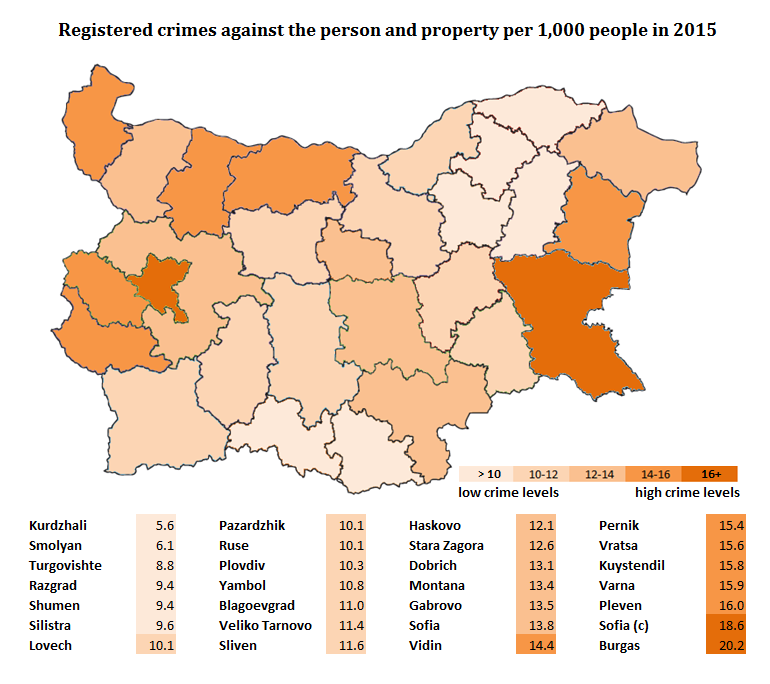 The share of unsolved criminal cases varies significantly among different districts. In 2015 the share of solved crimes in Varna and the Capital is barely 30%, while in Razgrad, Silistra and Targovishte it is over 60%. On the one hand, in the districts, which are more economically developed, the registered crimes are more and the relative share of successfully solved crimes is lower. Targovishte, Razgrad and Silistra, on the other hand, are the districts with the lowest crime rates (per capita) and also have the highest disclosure rates. 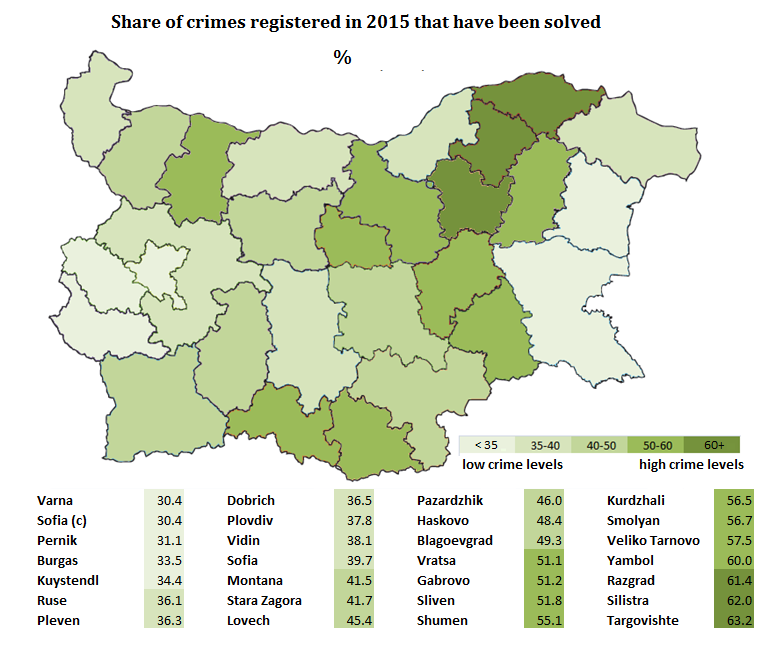 In comparison with the year 2000, the success rate of solving crimes has declined in 20 of the country’s 28 districts, with the biggest drops being registered in Gabrovo, Burgas and Montana.

The average result of National External Evaluation in mathematics after the seventh grade is Weak (2) in 181 municipalities 12.09.2022

On the eve of the new school year, it is time to look back and take stock of the results of the last one. In...

In less than a month, the new school year begins, and a few weeks after that the next parliamentary elections...

Wage growth failed to outpace inflation in the second quarter 19.08.2022

In recent months, the focus of the economic debate has been price growth, and rightly so – Bulgaria has not...