The speed and quality of the administrative services and the rule of law are two of the leading elements that determine local business environment. In May 2013 IME carried out a countrywide survey among 1680 companies as part of the upcoming second edition of the study “Regional profiles: Indicators of Development”[1].

The assessment consists of several criteria such as staff qualification, skills and attitude, speed of the administrative services, clarity of local requirements and regulations and overall corruption perception. The overall assessment of the administration’s performance in 2013 is lower (3.3/5.0) than in 2012 (3.5/5.0). 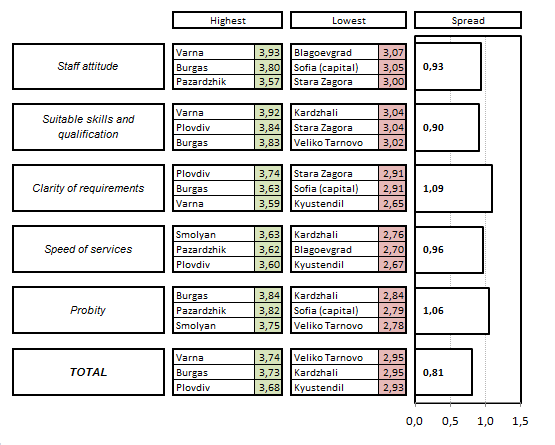 Note: The spread shows the difference between the highest and the lowest ratings for every single characteristic of the administrative services. The evaluation is based on a five-point scale where 1 stands for ”very bad”, 3 means “average”, and 5 means “very good”.

The attitude of the staff and their qualification are the highest rated characteristic of local administrations in Bulgaria. . Even the lowest rated districts achieve results above 3 (average).

Meanwhile the speed of the administrative service and the clarity of local requirements of the administration remain the most problematic areas. The most considerable regional differences are also connected with these two characteristics.

Trends: Some minor structural changes in the business survey make a direct comparison between data from 2012 and 2013 improper. However, it is important to note that for a second consecutive year Burgas is one of the top 3 most highly rated districts, while Kyustendil is one of the districts that receives one of the lowest ratings. Among the five best performing districts for a second consecutive year are also Smolyan and Pazardzhik, whereas the administration services in Stara Zagora are still perceived as one of the worst.

The survey evaluates the corruption perception of local businesses in regard to the district and municipality administrations, police and judicial authorities, as well as the local Labor Inspectorate. In 2013, the overall corruption perception in the country has deteriorated from 3.4/5.0 to 3.3/5.0. 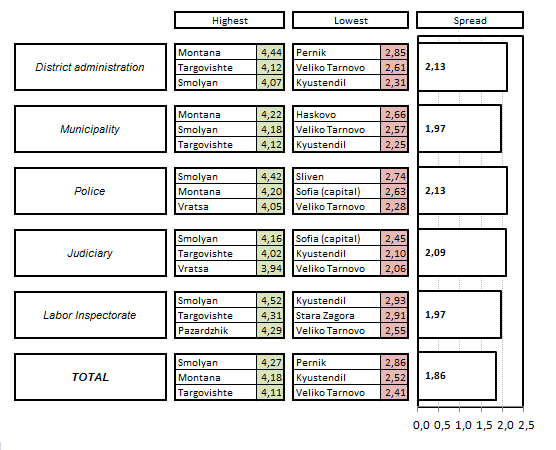 Note: The spread shows the difference between the highest and lowest rated districts in regard to corruption perception in each of the listed institutions. The evaluation is based on a five-point scale, where score 1 stands for “very high level of corruption”, 3 means “average levels of corruption” and 5 means “very low level of corruption”. 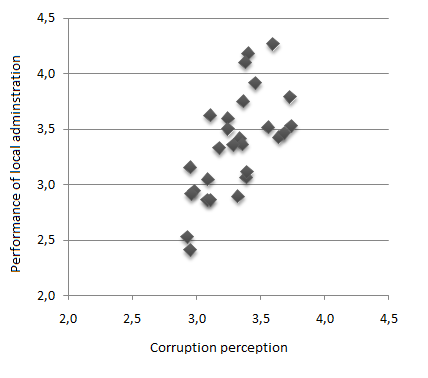 Irregular payments - nearly 15% of the respondents think that illegal payments from companies in their sector to the administration are made “often” or “very often” in order to obtain public procurement contracts. Around 12 % believe that it happens “often” or ‘very often” when it comes to getting registrations and permits from local authorities. 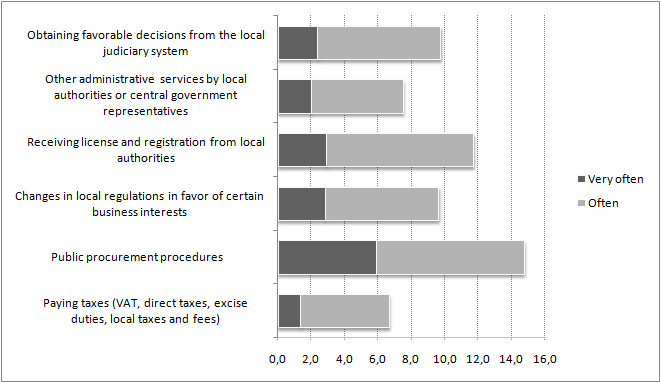 Electronic services are used by 21.7% of the companies with up to 10 employees and 34.7% of the companies employing between 11 and 50 people. Large companies are the ones that most often use e-services provided by the local administration - in the last 12 months preceding the survey 50.4 % of them did so. Small and medium businesses evaluate their quality as “rather high” (3.48/5.00). The assessment of the large companies is even higher- 3.77/5.00. 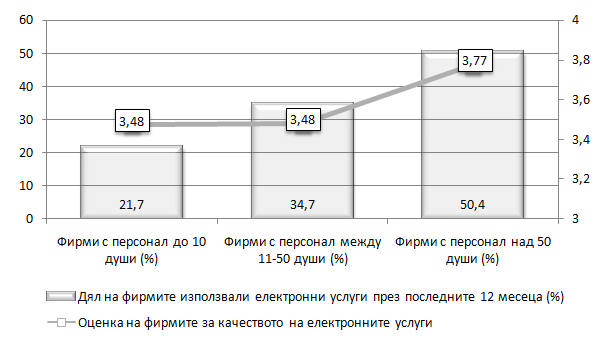 [1] The study will be presented on 14th November 2013. Along with the socio-economical development of the 28 districts in the country, the study includes several thematic analysis in various topics such as labor market development and trends in local tax policies.