16.06.2014Business optimistic about the number of employees over the next 12 months

In May 2014 The IME conducted a nationwide survey of 1680 companies for the purposes of the forthcoming third edition of the study "Regional Profiles: Indicators of Development".

The survey included questions assessing the expectations of enterprises about future investment and income dynamics, as well as their expectations of hiring or releasing employees. The results we obtained are in line with the consensus of a recovering labor market and point to more jobs and higher investment activity over the next 12 months.

During the same period of last year businesses expected increases in the number of employees in only 10 of the country’s 28 districts. Our latest survey shows that this year annual employment is expected to remain stable or increase in practically every district of the country. 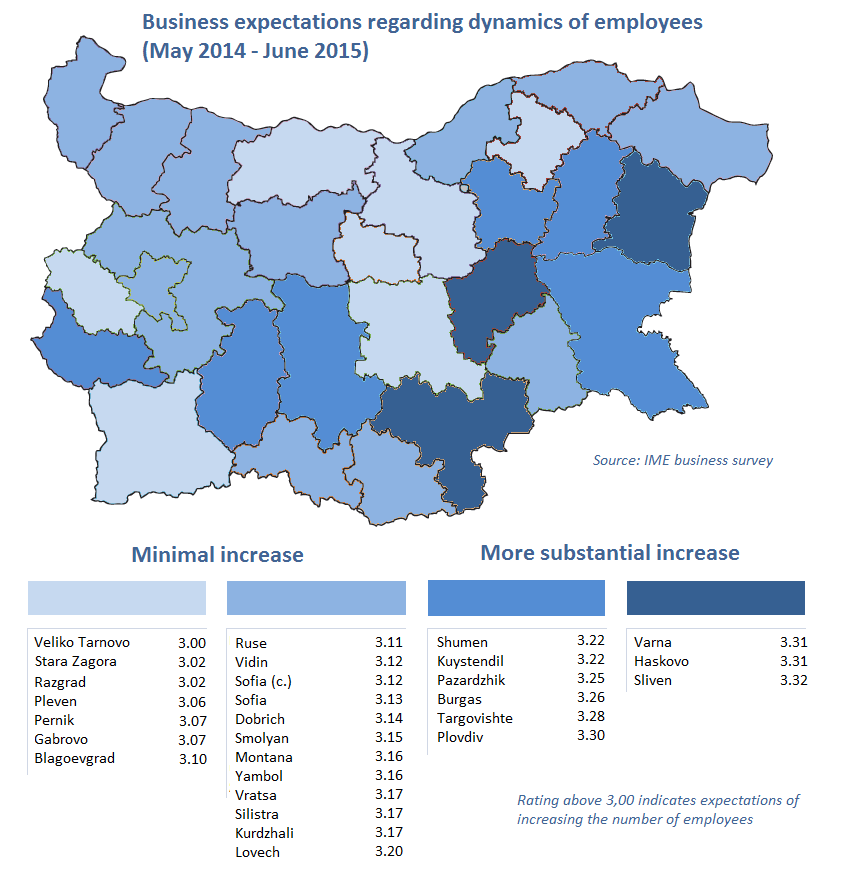 A significant increase of employees is expected in nine districts, including three in the Northeast region (Varna, Targovishte and Shumen), one in the Southwest (Kyustendil), three in the South-central region (Pazardzhik, Plovdiv and Haskovo) and two in the Southeast region (Sliven and Burgas).
The group of districts in which businesses believe that the number of employees will remain stable or will register insignificant increases includes Veliko Tarnovo, Stara Zagora, Razgrad, Pleven, Pernik, Gabrovo and Blagoevgrad.

These expectations are in line with three main trends that the IME pointed out in the summer of last year:

Enterprises point to both credit accessibility and EU funding as leading business environment factors. Both of these enjoy a more positive assessment by larger companies (those with over 50 employees), but the perception among micro firms and small firms is also mostly positive. At the same time, despite the high average rating of EU funds, 32.5% of respondents could not evaluate their effect.

In line with results from previous studies as well as other IME labor market analyses, the local labor market comes forward as the leading negative business environment factor. Businesses in Sofia (district), Dobrich, Pernik, Vratsa and Sliven find it the most difficult to find suitable employees.

Business environment factors such as infrastructure and the quality and speed of administrative services are considered somewhat neutral. In turn, the size of the domestic market (domestic consumption) is a problem especially for micro-firms and small enterprises.

Additional information about the IME survey among businesses will be posted on the website of the project "Regional Profile: Indicators of Development" in the coming weeks.