29.09.2014Burgas and Veliko Tarnovo are the new leaders in the numberof employees in their statistical regions

The upcoming third edition of the study "Regional Profiles: Indicators of Development" includes an in-depth overview of the labor market recovery in the country. The analysis of the dynamics of the number of employees by statistical regions highlighted some interesting trends in the redistribution of workforce between the different districts within them.

In three of the six statistical regions in Bulgaria there is a district that is a traditional leader in terms of employment. These are the Northeast region (Varna), the Southeast region (Sofia-capitol) and the South Central region (Plovdiv). From the starting point for the analysis of the labor market recovery (the first quarter of 2010), these districts continue to account for a large part of the employees in their respective regions.

At the beginning of 2010 51.0% of the employed in the Northeast region work in Varna, 63.1% of the employed in the South East region work in Sofia (capital) - and 48.8% of the employed in the South Central region work in Plovdiv. Due to the different dynamics of the labor market recovery in each district and region, that share deviates over the years. While in Plovdiv and Varna it remained relatively unchanged compared to the years before the crisis, Sofia (capital) employs an ever growing share of the workforce in the region - as of the second quarter of 2014 more than two thirds of the employees in the Southeast region of the country work there (Figure 1). This trend is getting stronger in the last six quarters (between the first quarter of 2013 and second quarter of 2014) due to the continuing loss of jobs in most of the other districts (most notably  Kyustendil and Blagoevgrad) and the faster pace of job creation in the capital city than the one registered in previous years.

Figure 1: Share of the employed in the Southwest region, working in Sofia-cap. (%) 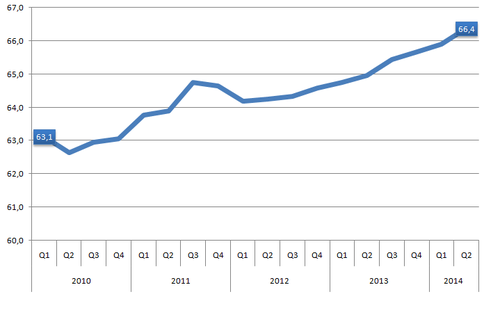 In the other three statistical regions (Northwest, North Central and Southeast) in 2010 there is no distinct leader in employment. However, in two of them there are some interesting trends.

Between the first quarter of 2010 and the second quarter of 2014 Burgas has developed into the evident leader in the number of employees in Southeast region. While the share of people working in Burgas and Stara Zagora in the beginning of the period is approximately equal, the latest data show a serious and growing advantage for Burgas. Currently 43.0% of the people employed in the region work there, compared to only 29.0% for Stara Zagora. This trend is in line with the dynamics of some leading macroeconomic indicators, which show increased investment activity (as well as increased interest from foreign countries) and intensive absorption of EU funds in Burgas.

Figure 2: Share of the employed in the Southeast region, working in Burgas and Stara Zagora (%) 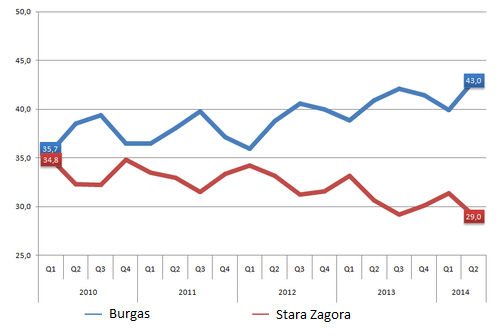 Between the first quarter of 2010 and the second quarter of 2014 Ruse gradually losses its leading position in terms of number of employees in the North Central region of the country to Veliko Turnovo. This is also the only statistical area in which the district with the greatest number of employees during the first quarter of 2010 retreats at second position. To some extend this trend is due to the similar size of the two districts – in 2013 252 thousand people lived in Veliko Tarnovo and about 230 thousand in Ruse. Despite the continuing loss of jobs the annual average employment rate for Ruse District is still a little higher than the one in VelikoTarnovo in 2013 (i.e. although the number of employees is smaller, their share in the number of local population is bigger), but the dynamics of the employees during the first two quarters of this year shows that this might change before the end of 2014, since the difference in employment rate of the population over the age of 15 of the two districts is barely 1 percentage point – 42,9% for VelikoTarnovo in 2013 and 44,0% for Ruse.

Figure 3: Share of the employed in the North central region, working in Ruse and Veliko Turnovo (%) 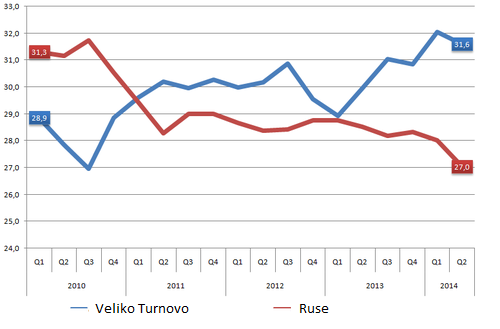 The concentration of a significant part of the employed population in the country in some areas is a process that will likely continue in the future, given the overall demographic and socio-economic processes taking place in the country. The dynamics of the number of employees by districts and statistical regions shows that in South Bulgaria, these trends are more distinctive, especially because of the existence of several strong economic centers, the axis Sofia-Plovdiv-Stara Zagora-Burgas.

Detailed analysis of the labor market in each of the regions and will be made available after the publication of the third annual edition of the study "Regional Profiles: Indicators of development" in November 2014.