Below we have reprinted and translated one of IME’s articles for local media related to the “Regional Profiles: Indicators of Development 2012”. The author of the article is Petar Ganev. It was first published in Trud newspaper on November 12th, 2012.

The study “Regional Profiles: Indicators of Development 2012”, published by the Institute for Market Economics and presented by Trud newspaper on Friday, shows a rather diverse picture of the country on the basis of the socioeconomic state and development of the regions. Some districts attract investment and offer workplaces, others do not; some people feel so safe in their city that they do not even insure their cars, others are used to the idea that their apartment needs additional protection; some people feel happy in their region, others cannot wait to get out of it in search of better opportunities.

Many of the trends can be identified intuitively, but during the work on the study we discovered some interesting facts, which I think I should shed more light on. Along with those facts we also discovered certain discrepancies in the data, which are very hard to explain. The connection between incomes, happiness and human mobility proved to be a true challenge to decipher. The main factors that bring higher satisfaction with life turned out to be housing conditions, the state of the environment, security and the social environment (that is, communication with neighbors, friends, acquaintances, etc.). Low income and joblessness (or bad working conditions) are the most common dissatisfaction factors. This leads to a higher satisfaction level in underdeveloped, but more tranquil and less polluted districts, such as Smolyan and Kardzali.

Personal satisfaction with life, however, has nothing to do with human mobility. When it comes to emigration from a certain region, the most important reasons are better opportunities (for education, work and income) in other settlements. To cut the long story short, people feel satisfied when their environment is clean and tranquil, but in the long term they seek possibilities for development and higher incomes. This explains the observed migration towards the capital – a much more polluted and less secure place, but one that offers more work opportunities and higher wages.

Gabrovo stood out as one of the most interesting regions. As it was expected, it scored well in the economic, business and environmental spheres. It managed to utilize a substantial amount of European funds. Demographics, however, proved to be a serious issue – the dependency ratio (that is, the ratio between elderly people and children) is the worst in the country, surpassing even the one in Vidin. These negative processes are already affecting employment and unemployment in the region and present a serious challenge before the economic development of Gabrovo. 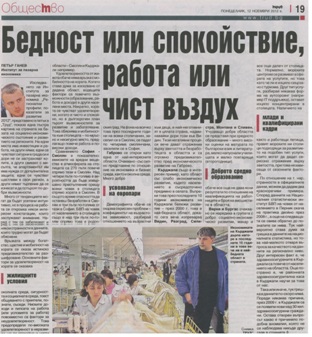 Kardzali is also an interesting example, since it is an economically underdeveloped region, where most of the population lives in villages. Despite these circumstances, in the past 10 years the economy of Kardzali has been showing positive development – in year 2000 this is the poorest district, while now it surpasses Vidin, Razgrad, Silistra, Montana and Sliven. The region scores surprisingly well in the field of high-school education – its children have very high marks on the matriculation exams, while there is a very small share of school dropouts and a small share of repeaters. Good high-school education however does not show yet a clear impact on the qualification of the workforce and the number of higher education graduates in the district.

Varna and Burgas, as expected, fell into the group of regions with good socio-economic development, however, they are still far behind the capital. It was expected that the cities by the seaside will have a well-developed services branch; this fact, however, seems to be linked exclusively to the development of tourism. Other services, like different types of outsourcing (IT support, for example) can be found exclusively in the capital. The big variety of young and well-educated specialists and operational airports make our “seaside capitals” a very good choice for developing such services, which can in turn have a serious impact on employment and untie its dynamics from purely seasonal factors.

Regarding the so-called data discrepancies, I can show you two interesting examples. According to the data provided by NSI, GDP per capita in Pernik has almost doubled in 2008, and the next year it falls to its usual level. In this case, most probably, we are faced with an error in the data of the national statistics, which makes us question the quality of data on local level in general. Another interesting fact is that the number of people with healthcare insurance in Kardzali surpasses the total population of the district. An even more interesting fact is that the healthcare administration in Kardzali learned that from our team. In this case it is likely that there is no mistake. For some reason, in 2009 30 thousand new citizens with healthcare insurance appeared in the district. This, however, leaves unanswered the question what led to this anomaly, which cannot be witnessed anywhere else in the country.