12.04.2013Are income policies adequate to the reality in the regions?

Since 2012, IME has been conducting a comprehensive study on the socio-economic development of the districts in Bulgaria. For the objectives of this research, we collect and analyze data on regional level for more than 50 various indicators. One of them is the average annual wage of the employed people (under labour and professional contracts).

What can be easily seen from the data on the 28 districts are the enormous and constantly growing differences of the work pay between districts. While in 2000 the gap between the best-paid districts and the ones with lowest wage levels was around 1.5 times, in 2011 the difference widened to more than 2 times. It is interesting to note that the city of Sofia steadily and unconditionally preserves its leadership throughout the entire 2000-2011 period. The bottom of the ranking in the beginning of the period is occupied by Smolyan (until 2005), followed only shortly by Haskovo (2006) and Blagoevgrad (2007). Since 2008 the district with the lowest pay has been Vidin, which is hardly a surprise having in mind the overall economic lagging behind of the north-western region and especially of the Vidin district.

Table 1: Difference in wages of employed personnel in the best-paid and worst paid district (in times) 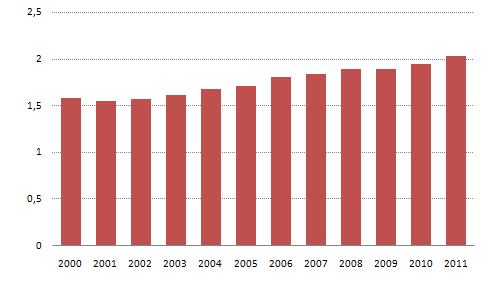 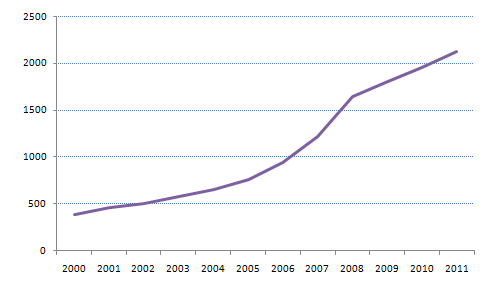 In general, regional wage data confirm one of the main conclusions in our study, namely that differences in the socio-economic development among Bulgaria’s districts are intensifying. This process is observed in the period of economic growth up until 2008, as well as in the crisis and stagnation period that followed. The discrepancies are especially evident between the centre, i.e. the city of Sofia, and the rest of the country - meaning that the country can be easily divided into Sofia on the one hand and the remaining territory, on the other. �This tendency becomes more acute over the years.

It is about time to start considering the increasing gap between districts in the planning and implementation of government policies, especially regarding income policies and measures against the informal economy. What we witness every single year is the constant increase of minimum social security thresholds by sectors and occupations for everyone without taking into account the region’s characteristics. While this increase might have a generally low effect on the labour force in Sofia, where wages are already above the new threshold, in less developed regions like Vidin, for instance, it could be harmful for a part of the employees, as the new requirement increases labour costs and might lead to job cuts.

Unfortunately, up to this moment the government has not published an analysis on the effects of the thresholds’ annual increases on employment or on the informal economy, although such a report is quoted in the latest version of the National Reform Program, uploaded recently on the website of the Ministry of Finance. The quotation of the above-mentioned analysis that can be found in the program, says: “During the crisis, the increase of minimum incomes for low-skilled labour has weak negative effects upon the dynamics of the socially insured people by economic activities. A more serious negative impact is observed in a regional aspect between the change of the ratio between minimum incomes and average wages and the dynamics of those employed. In the districts, where the increase of the ratio between minimum thresholds and the average wage is greater than the country average, the decline in the number of employed people tends to be greater than the economy’s average, with few exceptions”. The quotation testifies that even the Ministry of Finance identifies a greater negative effect from the increase of thresholds on employment in some regions. The situation with the minimum average wage is analogical - its constant increase (by 29% within a little more than a year, between September 2011 and January 2013) most likely gives the boot to some employees or sends a number of low-skilled ones into the grey economy. Most likely the negative effects are greater in the regions with a smaller difference between minimum and average wages.

The problem is whether these numbers, the economic theory and the empirical analysis of the Ministry of Finance will be finally considered at the annual discussions on social insurance thresholds or while politicians make their usual promises for further increases of the minimum wage? A differentiation of thresholds and minimum wages by regions or by districts and their tying-up to local labour conditions (local levels of employment, salaries, unemployment and other relevant indicators) might lessen the negative effects, if the elimination of thresholds and minimum wages are politically unacceptable. It might be good to think about such a change in policies, if we do not want to continue losing jobs.

The analysis of the regional labor markets clearly demonstrates that for most of them the last few years have...