The analysis of the survey conducted among 1,952 citizens of the 28 administrative districts was focused on three indicators: score on the performance of institutions, quality of life, and corruption. Their results show an interesting contrast at the district level that is largely in line with the perceptions of the business community. Under all three studied indicators, Kyustendil and Pernik are definitely ranked at the bottom of the list. It is interesting to note that poor scores were also awarded by residents of Plovdiv, Sofia (capital) and Sofia districts. At the other extreme stands the Targovishte district with some of the highest average scores on all three indicators.

A comparison of the results by indicators lead to the following conclusions:

In almost all districts in the country, less than half of the citizens evaluate their local administration's performance as "good" or "excellent". Exceptions include Burgas, Vidin, Veliko Tarnovo and Dobrich; in Burgas, just over 60% have given the highest score: 4 ("good") and 5 ("excellent"). The performance score given to the administrations in Pernik, Plovdiv, and Kyustendil, are exceptionally poor. It is hardly surprising that the majority of responding citizens perceive the level of corruption in these administrations as "very high" or "high". However, corruption is not the only reason behind the poor ratings given to administrations' performance. An example for it is the Smolyan district, where corruption perceptions are relatively low, but citizens' rating of the way local government performs is still low.

Of all institutions in the survey, the highest performance rating is given to schools. Very impressive results were returned in Targovishte, Varna and Dobrich, where over 80% of respondents evaluate the performance of the education system as either "good" or "excellent". As with all remaining indicators, Pernik and Kyustendil are again at the bottom of the score list. Schools also have the lowest level of corruption perceptions among all institutions covered by the survey.

The residents of a few districts only are satisfied with the quality of medical services. Positive scores on the performance of health facilities are reported in Targovishte, Varna, Ruse, Lovech, Pleven, Kardzhali, and Silistra. These are also the districts with the lowest proportion of people forced to make "facilitating" payments for medical services in the last 12 months (see Figure 1). The highest disapproval of the way hospitals operate is in Pernik, Kyustendil, and Plovdiv.

Graph 1: Proportion of People Required to Make Unofficial Payments against Medical Service during the Last 12 Months 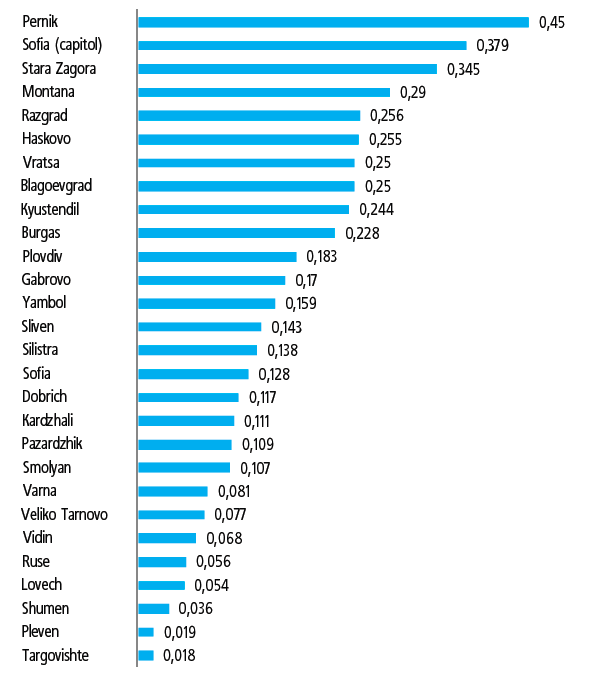 From among the institutions covered by the survey, the police ranked mid-scale, with considerable differences between separate districts. The residents of the Targovishte district, followed by those of Varna and Razgrad, are the most satisfied with the way the police service works. The lowest scores were given to the police in Kyustendil, Plovdiv, Pernik, and Sofia (capital city).

With regard to corruption among the police, the perceptions of businesses and citizens generally overlap. Businesses ranked police corruption as relatively low, but this "relatively low" level still means that less than half of the companies across the country believe that the police are not corrupt. The least confidence in police officers' integrity is reported in Pernik: only 3% of business respondents believe that the level of corruption in their district is "low", while 0% would rank it as "very low". At the other extreme are the districts of Smolyan and Targovishte, where more than 90% of respondents believe that corruption there is "low" or "very low". According to citizens, the police in Pernik and Kyustendil are the most corrupt, where nearly two-thirds of respondents do not trust the police. In the two largest districts centres - Sofia (capital city) and Plovdiv, over 60% of surveyed citizens responded that the police is "corrupt" or "very corrupt". At the opposite end of the scale are Targovishte, Razgrad, and Vidin.

There is a certain degree of correlation between the rating given to police work and the citizens’ sense of security, but there are also significant conflicting opinions. For example in Plovdiv, while 54% of citizens believe that the police do a "poor" or "very poor" job (only 17% have confidence in the police), as many as 93% ranked their security at home and in the street as being "good" or "very good". Clearly, the sense of security in the district according to respondents' perceptions is not due to the good work of the police, but rather to the lack of perception of a high crime rate. Indeed, the Plovdiv district has been traditionally characterized by lower-than-average levels of recorded criminal offences against the person and property (per capita).

Confidence in the courts is the lowest from among all institutions covered by the survey. This score for poor performance was reported by both citizens and the business community. One in three business representatives rated the level of corruption among the judiciary as "high". Most extreme in this respect are the scores (two-thirds of respondents) collected in Burgas and Sofia. The districts of Smolyan and Razgrad stand at the other extreme, where the greatest level of confidence is reported with regard to the judiciary's integrity.

According to citizens, Plovdiv appears to be the home of the country's most corrupt and worst performing judges: over 62% of the respondents gave the courts a score of 1 ("very poor") for performance, and approximately the same proportion gave the maximum score of 5 on the level of corruption. Exactly the opposite is true for Varna, where citizens gave the highest score to judiciary performance and reported the lowest level of corruption perceptions (after Targovishte).

Graph 3: Assessment of the Performance of the Judicial System and Corruption Perceptions within

Indicators measuring the subjective opinion of respondents about the quality of life include: satisfaction with the standard of living (income and consumption), work, education, health, social life, housing, environment, infrastructure, and security.

The first aspect to be noted is that there is no significant causal relationship between people's well-being as measured by GDP per capita in each district, and their satisfaction with the standard of living. The residents of Sofia (city), where income per capita is more than double the income of residents in the second-richest district of Varna, is ranked a poor fourth according to the level of satisfaction with the standard of living (a weighted average rating of 2.61 for all respondents). This list is topped by one of the poorest districts in the country: Razgrad, followed by Burgas and Silistra. This discrepancy can only partly be explained by the different price levels and different overall cost of living between districts, and also by differences in the structure of people's needs. Moreover, the larger differences between the income level of people living in Sofia and Varna probably also contributes to this discrepancy between the levels of average income and the sense of satisfaction with the standard of living.

Strikingly, in many Bulgarian districts people are satisfied with the quality of the environment (air, water, etc.). There are three notable exceptions: Pernik, Sofia (capital city) and Varna, where local residents do suffer from pollution.

In terms of their own level of education, the residents of Plovdiv, Pleven, Stara Zagora, and Pazardzhik are the most satisfied, while those in Pernik and Kyustendil are again ranked at the bottom of the list.

Housing is an indicator that attracts the best ratings; it can be explained by the high proportion of home ownership in the country.

And finally, the most intriguing finding: there seems to be no relationship whatsoever between the quality of life, administrative services, corruption level and all other aspects of life covered by the survey of citizens, on the one hand, and people's desire to relocate permanently from one district to another. Most telling in this regard is Pernik District, whose residents are obviously not satisfied with the working and living conditions there, but still less than 10% responded that they wanted to move to another district while 77% would not even consider relocating. Perhaps the proximity of Pernik to the capital city and the fact that many of its residents work, study and use various services in Sofia would partly explain their reluctance to move.

The largest portion of potential migrants is reported in Montana: over 40% of the district's population, immediately followed by Sofia (capital city) at 34%. Residents of Vratsa appear to be satisfied with the place they live in (only 4% would live elsewhere), and the same applies to Yambol (5.6%), and Pleven (7.2%) - some of the poorest districts in the country.