The indicators included in the „Education” category for this analysis reflect various aspects of the education process across the country and largely reveal the dynamics in primary and secondary education in separate districts.[1]

The main conclusions from the analysis of data for these indicators in the period 2001-2011 include:

The Impact of Demographic Factors

Demographic factors influence the education system directly as a result of the shrinking number of young people (under the age of 19). The smaller number of children of school age requires optimisation of the school network, the organisation of classes and teaching staff.

Another factor that has led to the closure of a huge number of schools in the period 2001 - 2011 is the movement of the population from smaller settlements to bigger ones. During the period under review, 793 out of 3,439 primary and secondary schools were closed around the country, or nearly one in every four schools. During the same period, only 3 districts have closed less than 20% of existing schools (Stara Zagora, Dobrich, and Plovdiv) while Sofia (city) is the only district where the number of schools has increased. At the same time, in districts such as Yambol, Shumen, and Targovishte, the number of schools has decreased between 37% and 42%.

Demographic processes have a negative impact not only on the employment of teachers and the use of school facilitie-s, but also on the access to education. Students from smaller settlements are often forced to travel on a daily basis to district centres or bigger towns nearby just to be able to participate in the educational process. In itself it further boosts the migration intentions of young families in sparsely populated areas, who want to ensure a good education for their children, which means that from a certain point onward the process of depopulation becomes self-propelled.

The number of schools is decreasing more slowly due to the options for restructuring in the school network such as merging classes from adjacent schools. The reason is that schools have certain fixed costs: taxes, maintenance, cleaning, administration, etc. which, in case the number of students is smaller, would weigh heavier on the school budget.

These trends are objectively the result of the urbanisation and demographic changes across the country. Intentions to reverse or at least delay these processes sometimes result in measures which actually worsen the quality of the education. For instance attempts to keep poorly performing or "problem" students at school result in deteriorated educational outcomes. Although, in the short term, it is indeed an option to ensure the survival of a given educational establishment and keep the teaching staff employed, in the long run surrendering the quality of educational standards would result in negative consequences such as loss of interest in school, non-recognition of diplomas by employers, inability to recruit good teachers because of the worsening reputation of the profession, and other effects.

The Effect of the Crisis

Since 2006, there has been a gradual decrease in the relative share of school leavers. The highest percentage of 3.2% was recorded in 2006. After the onset of the economic crisis in 2008, the proportion of school dropouts has decreased considerably, reaching its lowest levels of 2.4% in 2010.

The decline can be explained by several factors, the leading one being the limited economic activity of the population in most Bulgarian districts. It directly reflects in the lower demand for workers in the labour market.

Young people, who would otherwise have left school in order to start a job, are unable to do so and respectively to continue studying at school. Such conclusion is confirmed by the increase in recent years of the net enrolment ratio in higher educational grades (high schools) after completing grade 9, that increased by 1.8 percentage points over the period 2008 - 2011. Students in these grades are of an age allowing them to start regular employment.

Another factor that influences the shrinking number of school dropouts are the much more lenient discipline requirements in schools, due to fears that classes or even entire schools would be closed down as a result. This fear results in attempts to artificially keep non-performing students in the education system. Furthermore, the fact that the score from the matriculation exams is recognised when applying for certain specialties and universities has led some students to continue and complete their secondary and "try their luck" in university admission campaigns.

When the matriculation exam was first introduced, the intentions were to start from a low level of difficulty and gradually increase it. It may be one explanation for the lower scores each year and consequently the higher number of students who scored below 3.00 in recent years, especially during the school year 2011/2012. The higher number of "fail" scores from the matriculation exams explains the varying indicators and the lower average grade.

When comparing the average results, it becomes evident that the educational systems in some districts have experienced major difficulties in preparing their students for the 2012 matriculation exams. It applies, for instance, to Yambol, Pleven, Vidin, Razgrad, Shumen, and Montana. Practically the only districts which in 2012 achieved lower percentage of "fail" scores (under 3.00) compared to 2008 were Dobrich, Sofia, Targovishte, and Blagoevgrad. 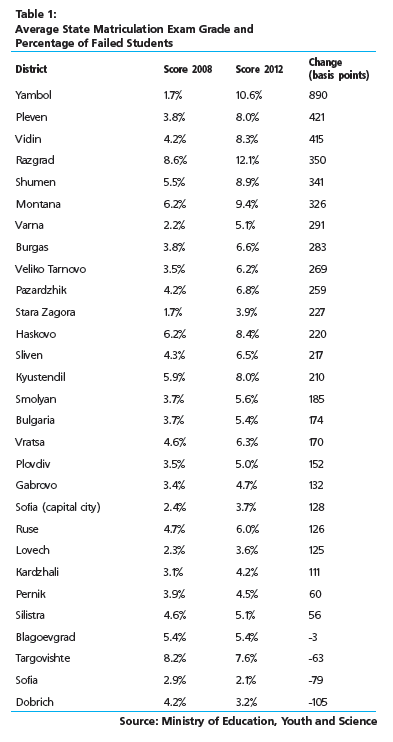 Some districts have managed to achieve higher average grade scores from the exam in spite of its increasing level of difficulty. This difference in performance between districts rather illustrates the weaknesses in the adaptability of some districts where students failed in great numbers, with the resulting deteriorating quality of their educational outcomes.

However, it is far from true for all districts. A good example in this respect is Yambol, where the fluctuations in the average score and the share of failed students are quite large when compared for instance with Blagoevgrad, where the differences in performance for each year are in unison with the country average. Regardless of the level of difficulty of the exam, the percentage of scores below 3.00 (failing) in Blagoevgrad remains between 3.4% and 5.4%, while in Yambol the difference is between 1.7% and 10.6%. Similarly, the average score in Blagoevgrad varies between 4.19 and 4.46 (or within 27 hundredths), while in Yambol it is between 3.98 and 4.56 (or 58 hundredths). Thus, despite the large share of scores under 3.00 (fail) in 2010 and 2012, in three of the last five years the average score in Yambol was actually higher than that in Blagoevgrad.

The large differences in students' performance at the matriculation examinations show that many educational institutions are still seeking the best methods to provide quality education to their students.

Lack of Interest in Vocational Schools

In many districts the largest decline in the number of students who have completed their primary and secondary education is due largely to the shrinking number of graduates of vocational high schools. This trend clearly indicates a shift of the interest from professional schools to liberal arts and specialised schools. The lack of interest is mostly explained by expectations that upon their graduation, possible job positions would be hard to find and low-paid, and that the profession would not be prestigious.

For the period 2008 - 2012, the number of graduates of profiled, general and vocational schools has decreased by different rates, and it largely reflects the students' preferences to one kind of education or another. The fastest decrease is reported in the number of vocational schools graduates; in 2012, nearly 32% fewer students completed their training at this type of schools than in 2008. There is somewhat slower decline in the number of students completing general education (about 25%), and the decrease is slowest for profiled high schools (less than 10%).

The lack of interest in vocational schools and the reduced number of graduates creates serious problem for businesses which are already experiencing major difficulties in employing vocational high school graduates. Many companies are forced to rely on people of retirement or pre-retirement age.

The option of hiring young and inexperienced staff entails additional costs needed to provide practical training or retraining, and occasionally even the risk of scrapping products that many companies are not willing to take.

The shortage of staff is not only caused by deficiencies in the school system but also in re-qualification programmes and life-long learning. More than half of the programmes in this area are funded with public money, and most of these programmes are run by the Employment Agency. For this reason, the emphasis is above all on training the unemployed and only to a very small degree – to re-train or improve the skills of those already in employment. Part of the problems with these programmes are identical with the problems related to occupational high schools: obsolete training, too much theory and very little practice, no real connection between labour market demands and the skills acquired by trainees.

In spite of these shortcomings, some positive results have been achieved over the past years. In many places the private sector has taken steps to ensure the necessary training independently, by organising free training courses and internships, and hiring employees for longer trial periods. It helps create the precise work-related qualities and skills that businesses need, while the private sector is better positioned to get to know its potential employees.

Another observation worth noting is that the shortage of workers in some places encourages labour mobility both within districts and between them. Large companies are an active participant in this process by providing organised transport to the workplace. Expectations are that this sort of mobility would be further stimulated by the gradual improvement of the road network, using EU funds.

The educational trends presented above are the natural result of negative demographic processes developing in most districts. Streamlining the school network in order to save money for building maintenance and higher pay for teachers is a logical step; however, it must be done without compromising access to education. The absence of real competition between schools in some smaller settlements certainly does not help in improving the quality of education.

One of the few positive developments outlined in the analysis is the slower rate of decrease of the number of teachers and students in schools over the period 2009 - 2011 as compared to the period between 2004 and 2008. Over time, some examples of good practices have emerged: employers offering special programmes for practical training of upper grades students. The most direct path to increasing the demand for graduates from various schools is to create a bridge between businesses' needs and the trends of development of the education system. For this to happen, however, schools need to be placed in a competitive environment not only through the right to distribute their own funds but also by giving them more freedom in the overall organisation of the educational process.

[1] In analysing separate districts and scoring their performance in "Education", several indicators related to higher education and the education level of local population also have certain impact. The present analysis, however, follows the trends in primary and secondary education.