In May, a number of surveys were conducted among businesses and citizens in all 28 districts of the country for the purposes of this study. The aim of the surveys was to supplement the statistical information available with the subjective perceptions of the business environment and living conditions in separate districts.

The results of completed surveys among businesses and citizens outline some intriguing results and interdependencies which deserve our attention. Given the importance of corruption and the operation of administrative services for the business environment in each district, most questions in the survey addressed to business representatives dealt with these two issues. Below is a summary of the results:

It is noteworthy that businesses were generally not overly critical of informal payments. On the one hand, it may be due to the lack of experience or direct observations of such practices, on the other, due to the non-exhaustive list of examples of situations in which businesses most commonly interact with local authorities, or, thirdly, the responses might just be guided by reluctance to go into details about common corruption practices. Judging by the responses to this particular question, it can be concluded that informal payments are relatively rare in the country, except for several districts. For comparison, when it comes to corruption, rather opposite is true: it is a relatively widespread phenomenon across the country, with a few exceptions only.

Nevertheless, Pernik District managed to re-confirm its leading position in the area of informal payments, too; these practices are the most frequently encountered in Pernik when compared to the rest of the country. Sofia (capital) is also reported for the common use of unofficial payments. Another interesting observation from the survey is that such payments, where  considered "common practice" by businesses, have been reported in all the cases listed, i.e. if there are perceptions of informal (facilitation) payments, they are widespread in the entire district: for public procurement, various administrative services, permits, etc.

The evaluation given by businesses of the work of local municipal and district administrations is largely consistent with the results on corruption. The districts with relatively high perceptions of corruption are also the districts where businesses give the lowest score to local administration's performance. Among these are the districts of Sofia, Pernik, and Kyustendil, with a score of 2.5-2.6 on a scale from 1 to 5, where 1 means "major flaws", and 5 means "no flaws". Somewhat surprisingly, the group of districts with relatively low scores for local administration performance includes Stara Zagora that is not listed in the category of corrupt districts.

Similarly to the indicators discussed earlier, although the question about the operation of municipal and district administrations allows for separate scores in several areas - competence of staff, speed, friendliness, etc. the same propensity to small variance between separate scores is observed within each district. Administration employees are either perceived as being quick, competent, friendly and incorruptible, or quite the opposite, but mixed „typologies” (for instance highly competent and corrupt at the same time) are generally not observed.

Meanwhile at the other end of the scale are Burgas, Pazardzhik, Razgrad, Targovishte, and Smolyan with scores of about 4, having in mind that the scale is between 1 – "major flaws" and 5 – "no flaws". In these districts, administration is perceived as having no major flaws. It should be noted that three of these five districts - Razgrad, Targovishte, and Smolyan - are also characterized by some of the lowest levels of corruption perceptions.

Graph 1: Relation between Corruption Perception and Businesses’ Assessment of the Performance of Local Administration

Table 1: Relation between Corruption Perception and Businesses’ Assessment of the Performance of Local Administration 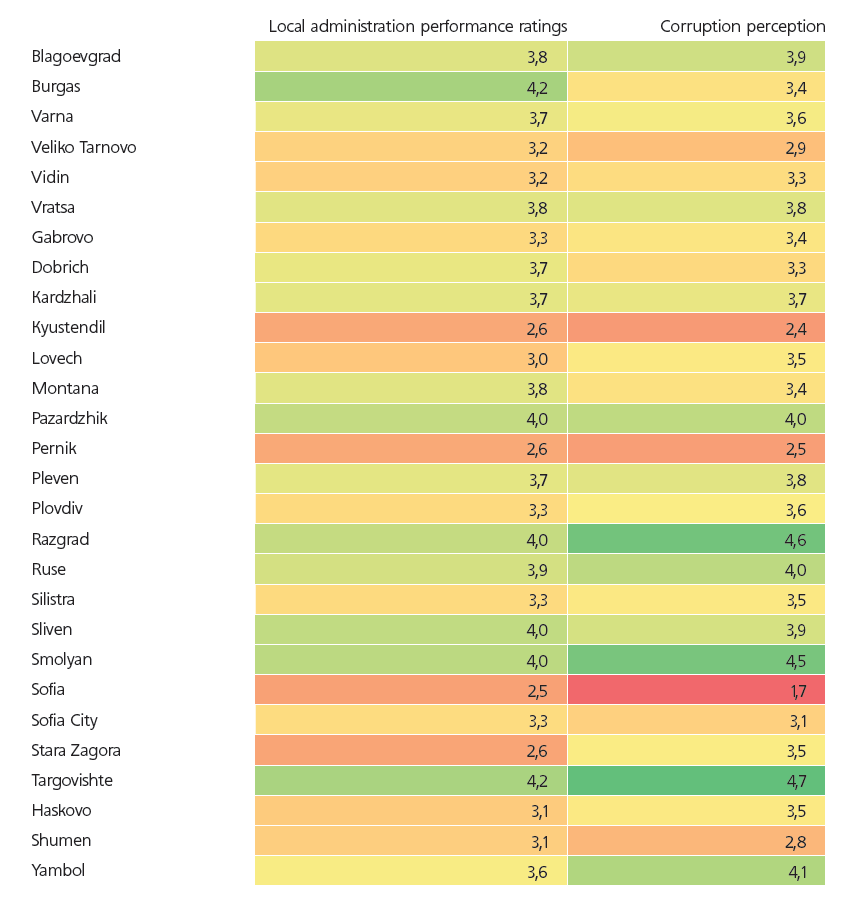 Both in business surveys and the questionnaires about municipalities included some questions about the level of provision and use of electronic services by the district / municipal administration. The majority of respondents stated that they had not used electronic services provided by local authorities. The only districts where the number of users of such services prevails above the number of those who do not use them include Blagoevgrad, Sofia, Stara Zagora, and Haskovo. Among the districts with the lowest percentage of respondents who have used e-services in the past year are Kyustendil (6.3%), Smolyan (8.2%), Sliven (12.2%), Lovech (13.3%), Vidin (16.3%), and Yambol (16.3%). Interestingly, even in the capital, that has the largest concentration of young and educated population in the country, respondents who have not used these services still slightly outnumber those who have.

In conclusion, there is a strong positive connection between corruption perceptions and the assessment of local administration's performance. The districts standing out as highly corrupt are also among the districts with relatively low scores for the administration's performance. The districts of Sofia, Pernik, and Kyustendil are the worst performing and the most corrupt ones, while the best performing and respectively "cleanest" from corruption are Razgrad, Targovishte, and Smolyan. Perceptions of both corruption and the performance of local institutions are relatively homogeneous, i.e. within the same district relatively small differences are observed in perceptions of corruption and unofficial (facilitation) payments between separate institutions or with respect to various administrative services. Also slight is the variance regarding different aspects of the administration's work: competence, integrity, speed, etc. If the local administration in a given district is perceived as poorly performing, then this perception is all-inclusive, so the administration as a whole is perceived as slow, incompetent, and prone to bribery.

In terms of e-government, surveys among businesses and the municipal administration have confirmed our expectation that the electronic services provided by local authorities are only used by a limited number of business representatives. In most districts (except for four: Blagoevgrad, Stara Zagora, Haskovo and Sofia) respondents who declared that they had not used such services in the last year, far exceed the number of actual users.